Skip to content
Two weeks ago, we decided we wanted to see something different. We looked at options and decided on a destination that would be really different from what we know. We bought our round trip flight ticket from Bucharest as it was the cheapest option we could find.

We arrived the night before in Bucharest, as we thought sleeping close to the airport would save us some stress in the morning. We got up at 5:25, a very early start. The hotel had a free shuttle and was 10 minutes away from the airport so that was great. We used Austrian Airlines so the first flight was to Vienna where we had a short stop before leaving for our secret destination. The views from the plane were amazing. We flew over the mountains in western Bulgaria or eastern Montenegro, along the coast of Turkey, and then over the Mediterranean Sea until we turned straight east through Israel and landed in Jordan. It was a pretty easy trip with a great lunch on the second flight. We were actually impressed as we never had good food on an airline before. Landing was great and exiting for us, eager to visit this new place.

Jordan is a Middle East country that has lots to offer. It even has one of the Seven Wonders of the World. It is full of very interesting rock formations and desert areas.
Our first stop was Amman, the capital. Amman has a very different feeling from any city we experienced so far.

Our first impression was great; people were really helpful, from the locals helping us to find our way on the local bus to smiling border agents giving us our entry visas. After taking a bus followed by a taxi to the first circle, we walked to our hotel. It was quite special to walk there as people dress different than what we are used to. Traffic is a little crazy in the downtown area and every taxi or minibus were honking at us to make sure we didn’t miss their bright yellow cars. This was fun, until we got to the worst hotel we stayed at so far. We saw quite a few rooms in this trip already but this was, by far, the dirtiest of them all. Everything was broken, from the window screen to the bathroom door. We  stayed there anyway, as it was just for 2 nights. The room was already paid for and we didn’t want to argue to get our money back.

We went out and walked downtown in the crowded streets of the Souq. There are tons of small markets, shops and bakeries. Here, there are no price tags on anything so we had to ask and also sometimes get ripped off of a few JD (as locals call their Jordanian Dinars) as we are tourists and don’t know yet the value of things… but it is part of the fun of discovering a new country.

The next day, we visited an old Roman Colosseum and the Amman Citadel, which are both in ruins. It took us 3 hours to visit these 2 sights and we also had nice views over the city from the Citadel. After this, we needed a break as walking under a nice blue sky and 40C is really hot and exhausting. We went inside our crappy room for a couple hours and went out again for the night activities of the downtown streets.

For our last morning in Amman, our only goal was to find the Wahadat bus station with the help of a friendly taxi driver. We had to try 2 taxis as the price the first driver was asking was a little too much and after a little arguing, Seb asked him if he could just use the meter and he drove away. Too bad for him, we gave the meter money to the next one, with an extra tip for a total of 3 JD. That station is 3 km from downtown and it’s where our bus to the next awesome town is leaving from! 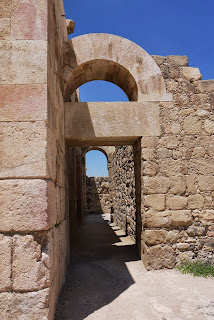 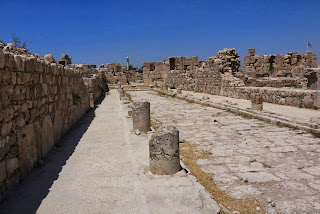 0 Replies to “And the secret destination is… Jordan!”