Skip to content
After visiting Montenegro, we decided that we were going to visit Bosnia for a few days. The trip from Zabljak to Mostar was impossible to plan as nobody could tell us if and when there was a bus. They mostly only know the direct destinations from their town and can’t help much with the transfer after that. We then decided to start with Sarajevo as it was easier to get there and move to Mostar afterwards. We were up really early to get on the 7:15 am bus to Sarajevo. We were actually really fast at getting ready and waited for a little bit at the station. Nobody was around for a while but then all of a sudden, everybody seemed to arrived at once. We were hoping for a big bus, but instead it was a little mini-bus that pulled in. Fortunately, half the people were going to Podgorica. The 18 passengers mini-bus was full, but the road was nice.. well the view anyway! We spent a good portion of the trip chatting with a guy from California that has been on the road for 15 months. It was inspiring to hear about all the places he visited so far. We arrived in Niksic for the transfer and there was already a bus leaving for Sarajevo. We got in only to find the bus fully packed. We spend the first 1.5 hour standing in the back of the bus. The bus was really slow because of the mountain road. It almost felt as if it was not going to make it all the way to Sarajevo. Eventually some people got of the bus and we could sit. When we arrived in Sarajevo, we were in the east station and needed to find a way to the center. We were going to walk but it seemed way too far. Suddenly a guy with a backpack was running after us. He also didn’t know how to get to the center so he tagged along. We finally found the city bus station that was 5 min away, hidden from the bus station. For once our french was useful as a man beside the bus helped us understand the bus driver and he exchanged us 5 Euros to Convertible Mark. It was enough for all of us to take the bus. We got of the bus in the old town and decided to look for a place with WiFi in order to book a room somewhere. We usually prefer to have a place booked when we arrive in a new place, but we didn’t this time. We had a beer in the Pirate Pub that accepted Euros with our new German friend where we booked a private room in a ‘hostel’ (really a 4 bedroom apartment which 3 rooms are rented out). We set our bags down and went for a walk in the old town. The city looks really different than all the other European cities so far. We liked the mixture of religions; there is a Catholic church facing a Mosque. We had a good time in Sarajevo, enjoying the nice vibe of the city.

When we left Sarajevo, the temperature outside was 28 C. Shortly after we left, we could see the temperature rising… when we got to Mostar, it was 43 C outside. It felt like leaving a fridge to step into an oven. Or as one friend said; it’s just like you are standing in front of a hair dryer… all day! We weren’t too sure how to find the pension as the map was rather confusing, but really it was not even 2 minutes from the station. Our room had AC, which we enjoyed for a little while, before being ready to go back in the oven, and go for a walk in town. There are a lot of buildings with bullet holes or half destroyed in both Mostar and Sarajevo, a constant reminder of the war that happened not too long ago. There wasn’t as many tourists as we first expected so that was a plus. We walked all the way to the old bridge and around the little streets of the old part of town. Mostar was worth the detour. 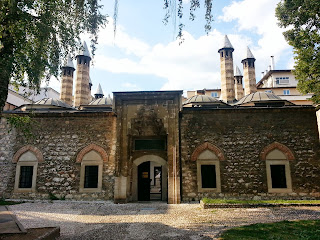 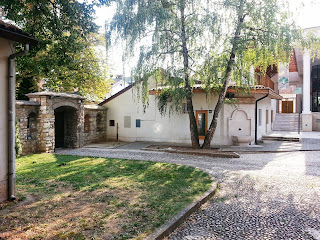 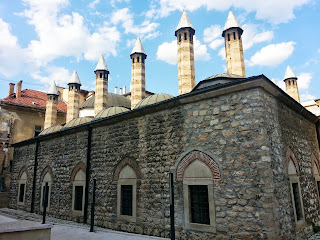 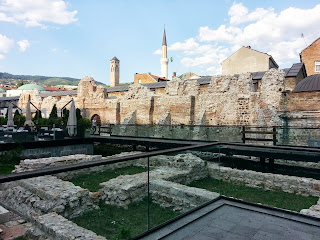 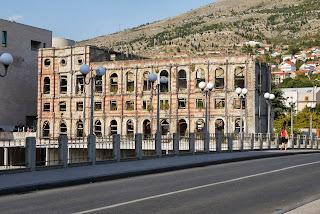