Day 11 to 14, from Tilicho Lake to Thorung La Pass

We woke up without an alarm at 6am. We though we were going to take things slow but we were ready to go by 7am after our breakfast. We took only Seb’s backpack with water, snacks and our down jackets so we could be more gentle on our bodies. We started our ascent to the lake. It took us two hours and forty minutes to get to the top. It was tough to catch our breath, but all the efforts were rewarded by amazing views of the Annapurna range and the snow-covered mountains. When we got closer to the top, we had to walk on compacted snow. The sun was there in the morning so it was good and warm-ish, but when we arrived to the lake the sky was covered with clouds. The lake was much bigger than we had expected, and we could see the glaciers coming right down in it. We started our descent after a nice break at 5000 metres of altitude. We came back down to the base camp at 4100 metres. We enjoyed the view coming down but we had to be very careful where we put our feet as there was some landslide sections. We were hungry when we arrived so we had Nepalese pizza for lunch before sitting down in the dining room to read. 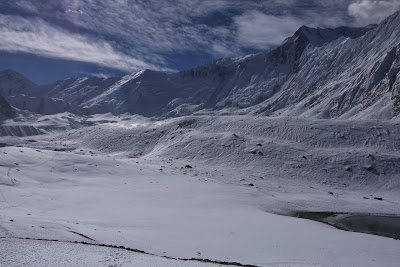 We left early in the morning and started walking on the landslide area. It was very cold as the sun was not over the mountains yet. We walked through a deserted village sitting atop a mountain. We had the most amazing views so far. We could see at least 3 days of walking before Manang and even the Tilicho valley and the path to Tilicho Lake. Just as we were getting ready to leave, we had a toilet paper malfunction. The roll fell on the ground and started going down. AA started running to catch it but thanks to the wind, we had a nice TP banner flying around.

We went over the mountain and down in the main valley. It was a very steep hill going down. We followed the path across the bridge and had to walk all the way back up to the same height to reach the main trail. Just before arriving in Yak Karka, we were stuck behind a big group of donkeys. While in the village, the donkeys were distracted and we finally had an opportunity to pass them. We kept going until we reached a bridge and the village of Ledar at an altitude of 4200 metres.

We ordered lunch and decided to have a medium pot of tea. Seb asked the lady how many cups it contained (to see if it was worth buying a pot instead of cup by cup). She actually measured it with water before telling Seb it was 7 cups. We ordered Dhal Bat and it was the strangest we had seen so far. It had rice and the lentil soup plus a small plate of cabbage, carrots and potatoes in a tomato sauce. There was also cold cooked veggie dipped in vinegar and spices and a weird fatty pink styrofoam like chips instead of Pappadum. It felt like they didn’t want to start supper already so they gave us the left-overs. At night somebody else ordered Dhal Bat and it looked much better. We were debating getting the veggie burger for supper, but when we saw it, a dry patty stuck between two pieces of white bread, no sauce or veggies, we changed our minds and got Tibetan bread instead! 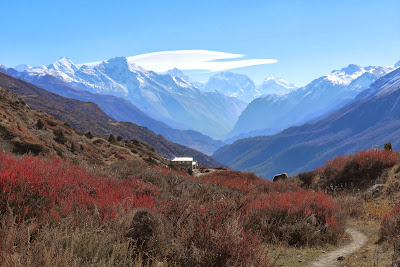 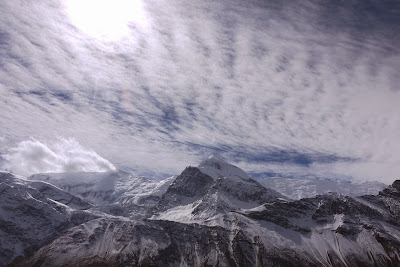 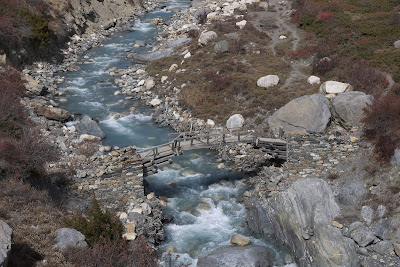 Our walk started with a climb and eventually we had a choice to make. The new bridge or the old bridge. A Polish guy we met the day before had read something about the new path being more dangerous than the old one. When we were at the junction, we could see that parts of the new path had actually fallen down. There was a new higher path but we though the old one that is being used by the farmers and their animals was probably a safer bet. We made it to Thorung Phedi at 4450 metres in altitude in about 2 hours and stopped for a cup of mint tea. We then started our long ascent, only 400 metres but really steep, to the High Camp.

We took it slow and arrived at the lodge around 10:45. We took our room with a hard as wood double bed and went to the restaurant to order lunch. While we ate, we could see two big mountain eagles flying and chasing just in front of the restaurant windows. We seemed to have arrived just in time as many people started to come in as we were having lunch. The views over the mountains were breathtaking. We climbed to the viewpoint, a few meters higher. As they say : Walk high, sleep low. They recommend not sleeping in the high camp but as we had already spent a few days over 4000 metres we thought we would be fine. We had a very nice view from the viewpoint and we enjoyed it almost to ourselves.

After our little expedition, we came back down to the restaurant to sit by the sun-filled window. Seb also played a dice game with three Israeli guys. Around 6 pm, we went in the room to read and warm up in our sleeping bags. It was very cold outside and inside the rooms, we could easily see our breaths. The cold also made it very dangerous to go to the toilet as all the water on the ground was frozen solid. Some people said they would leave at 4-5 in the morning, but we didn’t see the point of leaving that early as we prefer to see the trail.

Everything is harder at 5000 metres high: stretching, walking, even just making our beds and we were short of breath. We have to remember to breathe. Even getting excited can’t last for too long as we must stop to catch our breath!

Day 14 Crossing the Pass and to Muktinath

After two weeks, it was time to cross over Thorung-La pass. We didn’t have the best sleep as we woke up around midnight. Not too long afterwards we could hear some people getting ready to leave the lodge at 3-4 am. Finally our alarm went off at 5 am. We got up, packed our bags and went for breakfast. The restaurant was already full of people eating and leaving. Surprisingly, our breakfast was ready at the time we had ordered it. We started our ascent around 6:15 am. We had to walk slow and because of the altitude we had trouble catching our breath. There was a lot of people and groups on the trail. It was hard to keep a good rhythm to go up as there was also donkeys and horses going up and down.

The part from the high camp to Thorung-La was actually easier that the part from Thorong Phedi to the high camp. It had steeper sections with somewhat flat parts to catch our breath and take pictures. It was unfortunately fairly cloudy. The wind didn’t really pick up until we reached the summit. We took pictures on top of the pass, but it was very cold with the wind. So we hurried down the 1186 metres to Charabu where we stopped for tea and excellent momos. This first part was very steep and very hard on the knees. After our short break, we kept going down 430 extra metres to Muktinath. We were getting really tired and it was starting to snow on our way down.

We arrived in Muktinath, looked at the information board and decided on the second hotel we saw, as it was promoted as having free WiFi and hot water showers. We took a double room with a big bed, dropped our bags and went for a shower. It felt so good to finally have hot water! The water pressure was not quite what we would have liked, but it was still a hot shower! They even had a real western toilet that flushed! No need to fill in the tank ourselves. After our shower, we went downstairs to the restaurant where we had lunch. We were able to use WiFi to send a second message to our parents to let them know we were still alive. It snowed for the remaining of the day so we couldn’t see the surrounding mountains. We stayed in the room for most of the afternoon, watching videos and coping photos. After 14 days of walking, we took a well-deserved day off in Muktinath. 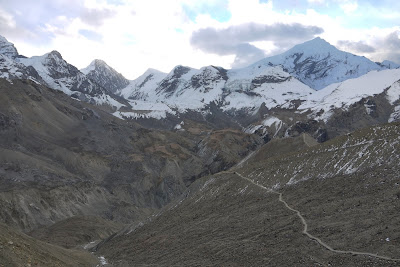 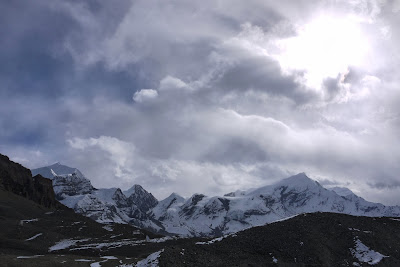 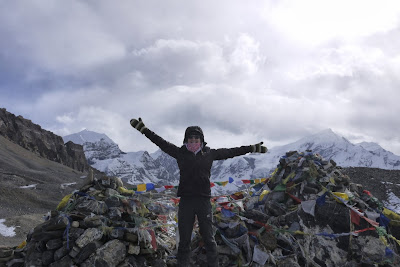