We weren’t sure how Seb’s knee was going to be after the long descent in Tatopani. As soon as we left we had to stop at the checkpoint. We learned that because of the strike the buses to Beni were 2200 instead of 200 rupies as they needed to have police escort. It confirmed our idea of walking all the way and not taking a bus! We finally left Tatopani and started to go up the never ending stairs. We walked up stairs all day in a beautiful valley. A few people tried to point us in the wrong direction for some reason, all saying : other way, other way!

We stopped for lunch in Shikha. After resting our legs, we climbed more stairs to the village of Phalate. Just outside the village, a guy was doing some sort of welcome dance for us so we decided to stop there for the day. We ordered Tibetan bread and Gorkha beer which came in a recycled Tuborg bottle. The lady who took our order left just after getting us our beer so we never had the bread. We enjoyed the scenery for the remaining of the afternoon but when it got cold, the owner invited us in the kitchen by the wood stove. We read and talked to the owner.  Just before the owner started cooking our food, he went running outside and came back with his goat. We went back to the room, in a building with five rooms. It could have been very cosy and noisy as the walls were not going all the way up to the roof. We could also clearly see downstairs and the goat through the cracks in the floor.

We finally left at 8:00 am, making our way slowly up more stairs to Ghorepani. We arrived there around 10 am. We were surprised to see that many big lodges, but as it is the starting point of the hike to Poon Hill, it made sense. They had decent WiFi, so we took the opportunity to book our flight out of Nepal. We kept going up stairs to a nice viewpoint of the Annapurna range. In two days, we went up 2000 meters in rock staircases. We enjoyed the view for a while and kept walking towards Deurali Pass before coming down a small village. A young mother asked us where we were going and if we could bring a note to somebody in the next village. We took the note and started our descent. We gave the message and as there were many people in the village already we decided to keep walking to the next lodge. A very loud remix of Justin Bieber welcomed us to the “Tranquility” lodge so we rapidly made our way through. Somehow, we got on a side path and had to climb to get on the correct path. That is when we heard some noise in the forest. We looked up and spotted a monkey. It had a black face surrounded by a crown of white hair, like a small lion. We spent a few minutes watching the monkeys before moving on to the Trekker’s Sanctuary lodge where we decided to stop for the night. 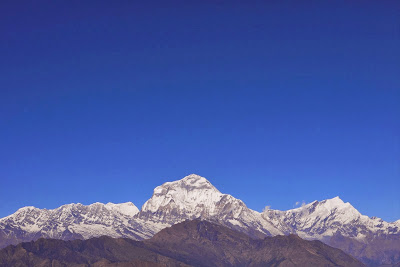 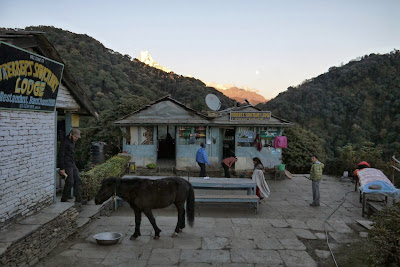 We went down to Tadapani, were we quickly stopped to buy toilet paper (very important to carry some as it is not available in any bathrooms) before continuing on to Ghandruk. We stopped for lunch at the very beginning of the village in a small lodge where we could hear the neighbours play music. The seemingly hang over owner sat with us for a while. After eating, we followed the owner’s advice and stopped a the German Bakery for chocolate doughnuts. They were big and tasty. We then started to descent the interminable steps to the bridge and then up to the village of Landruk. We stopped in the first lodge as we couldn’t go further. We took a room and rushed to the ‘hot’ shower. It was freezing cold, so once again we washed our hair and used a towel to clean our bodies. 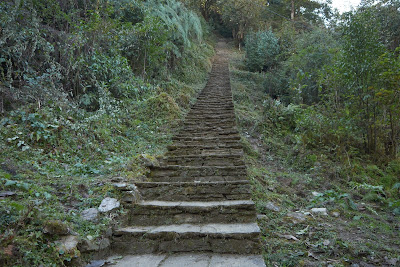 We left the hotel at 7:45 and went up the stairs to the village. We walked through, trying to follow the trail, but with the new road, the trail is impracticable at best. We had just started when a young girl in a field asked us for money saying she was very hungry. We were trying to stay on the trail when a family told us to walk by their land. We did so and they asked for a photo, and then wanted money for the photo, and the girl kept asking for us to give her our clothing or shoes etc. We felt like walking ATMs. This trail is obviously more touristic because we kept getting asked for money by everyone. When we first left the village in the morning, a nice black dog started to follow us. He followed us all the way to the second village. We were starting to worry he would not turn around when he went his separate way.

We came across a sign that said : short way to Pokhara, so we decided to try it. We are not sure if it was any shorter, but it was much steeper! We climbed to the top of the mountain to the village of Pitam Deurali where we stopped for a few pictures before continuing toward Dhampus. We stopped at both Tims and permit checkpoint to get our exit stamps, and started our very long descent along the stone paved trail. We stopped for lunch in Dhampus. We were going to stop there for the night but were not completely satisfied with the hotels. The couple we had lunch with were going to catch a taxi from Phedi, so we decided to do the same. We walked down the many many stairs to Phedi, going twice in the wrong direction, adding to the already endless stairs. When we finally arrived to the bottom, a few taxis where parked there and the drivers came our way to offer their services. The first price they asked us for was 3000 rupies, about 2 times the amount of the normal tourist price. We told them we needed a coffee first. The taxi drivers came back to see if we wanted to discuss the price of the ride. We bargained it down to 1800, which was quite expensive but because of the strike, it was our only option if we didn’t want to walk the extra 20 kilometres on the side of the highway. When we arrived in Lakeside Pokhara, the driver dropped us at the main corner and we were almost jumped on by hotel owners. We took a business card and told them that we wanted to see the lake first. We walked to the lake and decided to have a look at the first hotel, Lake House. For 600 rupies (about 6 CAD) a night, it was pretty good. We had a real bed and a very hot shower (we actually had to add cold water) and no cracks in the walls. After supper, we walked around, shopping for a celebratory bottle of wine to be enjoyed in our room. The next morning we changed hotel to find one with WiFi where we stayed for a week, relaxing and enjoying different types of food. 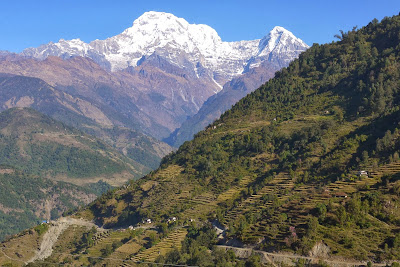 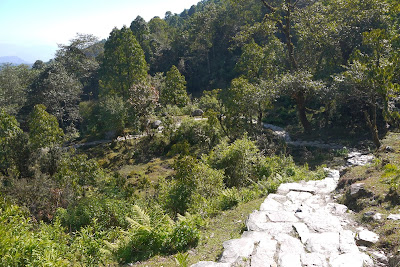