As our flight from Kathmandu was later in the evening, we decided to walk the six kilometers to the airport. It was a very dusty and dark walk as there was, once again, a power cut.

We finally arrived in the very confusing and crowded airport. We walked in, went through “security” (we put our bags in the machine but nobody was paying attention) and tried to find the right counter to check-in as the screens where not working. The immigration officer didn’t even look at our dutifully filled immigration papers before stamping our passports. For the second security check, there were two different lines, one for men and one, much shorter, for women. This security check was again very fast and not thorough.

Next step was pre-boarding which consisted of a guy ripping our boarding passes off, and much later somebody else entering them in the computer. We saw the plane arrive and park from where we sat, and had a good laugh as they used the buses to bring people to the main entrance… on the other side of our 10 meters wide waiting room. We boarded the biggest plane so far on our trip. We had planned to sleep a little bit but the people sitting behind us had other plans.

We arrived in Kuala Lumpur 15 minutes prior to our schedule. We followed the other passengers on the tarmac and through immigration. There were many restaurants outside and we settled on the White Coffee to have some peanut butter toasts (we had missed our precious peanut butter so much!) and coffee. We walked to platform three where we found the Star shuttle bus and got in just in time as it left five minutes later. The ride to the center took about one hour and we were really impressed to be back in civilisation, with a decent bus, street lights, nice roads, etc.

When the bus stopped close to Jalan Petaling, we got off and walked in the unusually quiet Chinatown as it was about 6:30 am. We stopped in one hotel to ask for the price, but found it too expensive. We went out and saw the Backpacker Traveler hostel. The room price was within our budget and we could get it immediately. We slept for a few hours before heading out for a walk. We walked by the nice and clean Jamek Mosque, across immense Merdeka Square with the 100 meters tall flagpole. We continued on Jalan Raja, walked by the nice colonial style Sultan Abdul Samad building and the Old Post Office. We walked back towards Chinatown and stopped for lunch at Subway, for finally something else than fried rice! Later in the day, we went out for a walk in Little India, seeing many shops selling headscarves among many other colorful clothing items. 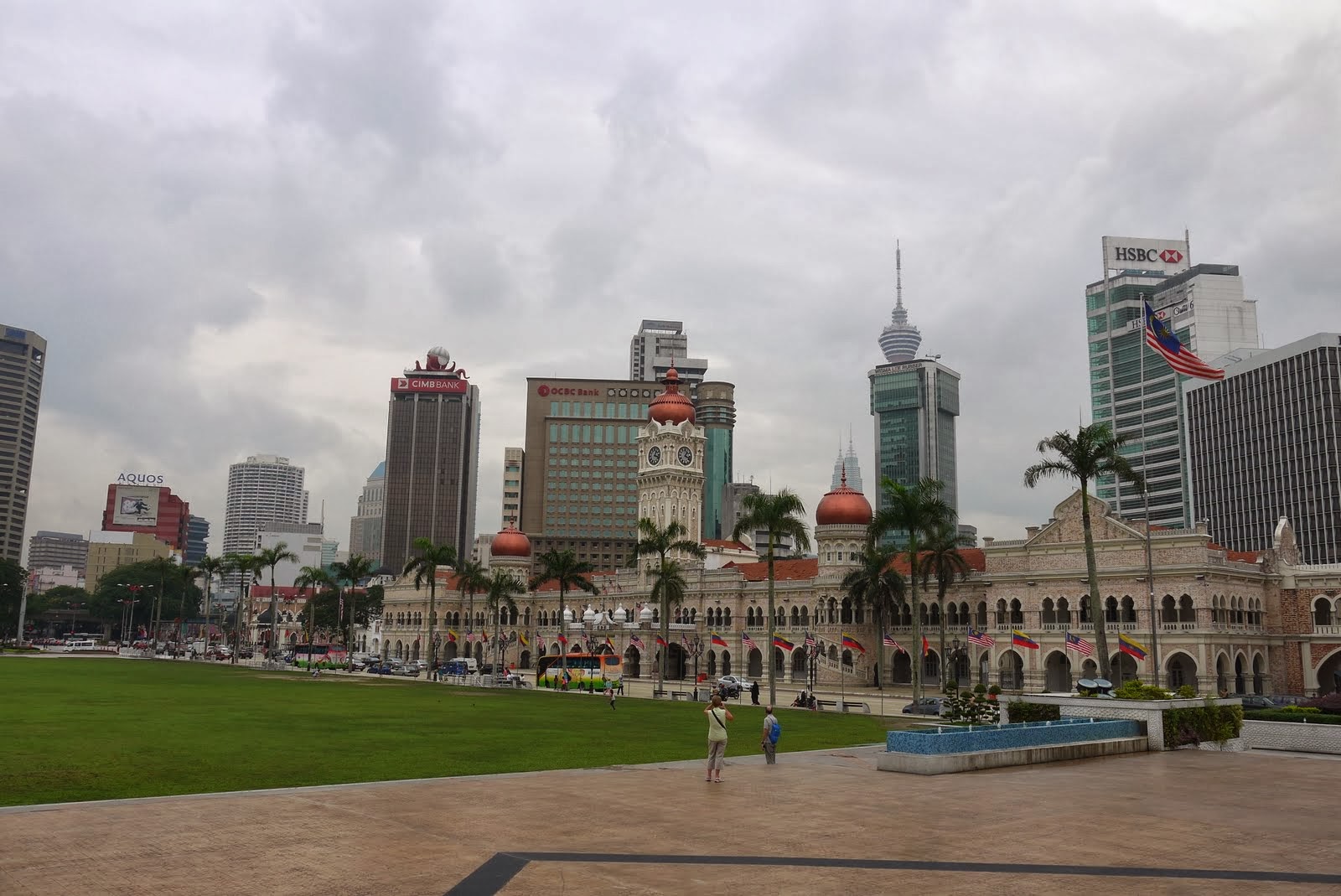 On our next day in KL, AA discovered many rashes that looked like mosquito bites but we didn’t pay more attention to it as she gets bitten all the time. We spent part of the day catching up online before going out for some street food. We asked our waiter if there was meat in the pineapple fried rice. He said prawns or seafood. We asked if is was possible to get it without meat or seafood. He answered with: Chicken??… We finally got through with our request and received it without meat (except for the little sprinkle of bacon on top). Malaysia is not the easiest when it comes time to eat for a vegetarian.

After eating we came back to the hostel where we realized that the little bug running on the bed was probably a bed bug, and that the mosquito bites were, in fact, bed bug bites. We came down to the reception to ask for a different room. The guy didn’t seem surprised at all and asked if we would mind staying there for the night as he didn’t have the same kind of room available. We asked if there was anything else available, dorm or anything really, because there was no way we were going to risk having even more bites. He finally gave us an “upgrade” to a room with an ensuite bathroom but told us we would have to move again the next morning. We spent the following four hours going through everything we own looking for the little beasts to try and not bring any in the new room. Needless to say that wasn’t our original plan for the evening.

After going through everything we own again the next morning, we needed some fresh air so we walked towards Menara KL, the big CN like tower. On the other side of KLCC we followed the signs to the Petronas twin towers. We went through the walkway over the streets. We were expecting a small one just going across the street but it actually stretched almost all the way to the towers. We decided to go inside the Suria KLCC, one of many shopping centers, as we wanted an ice coffee. We walked though the mall and came out on the other side, right between the feet of the twin towers. We took some nice pictures and kept walking East to find one of the few Arab restaurants we had seen online. The hummus, pitas and falafels were very good and this is definitely one of our favourite type of food. We came back to the hotel under pouring rain, on the slippery sidewalks and booked our bus for Singapore for the next day. 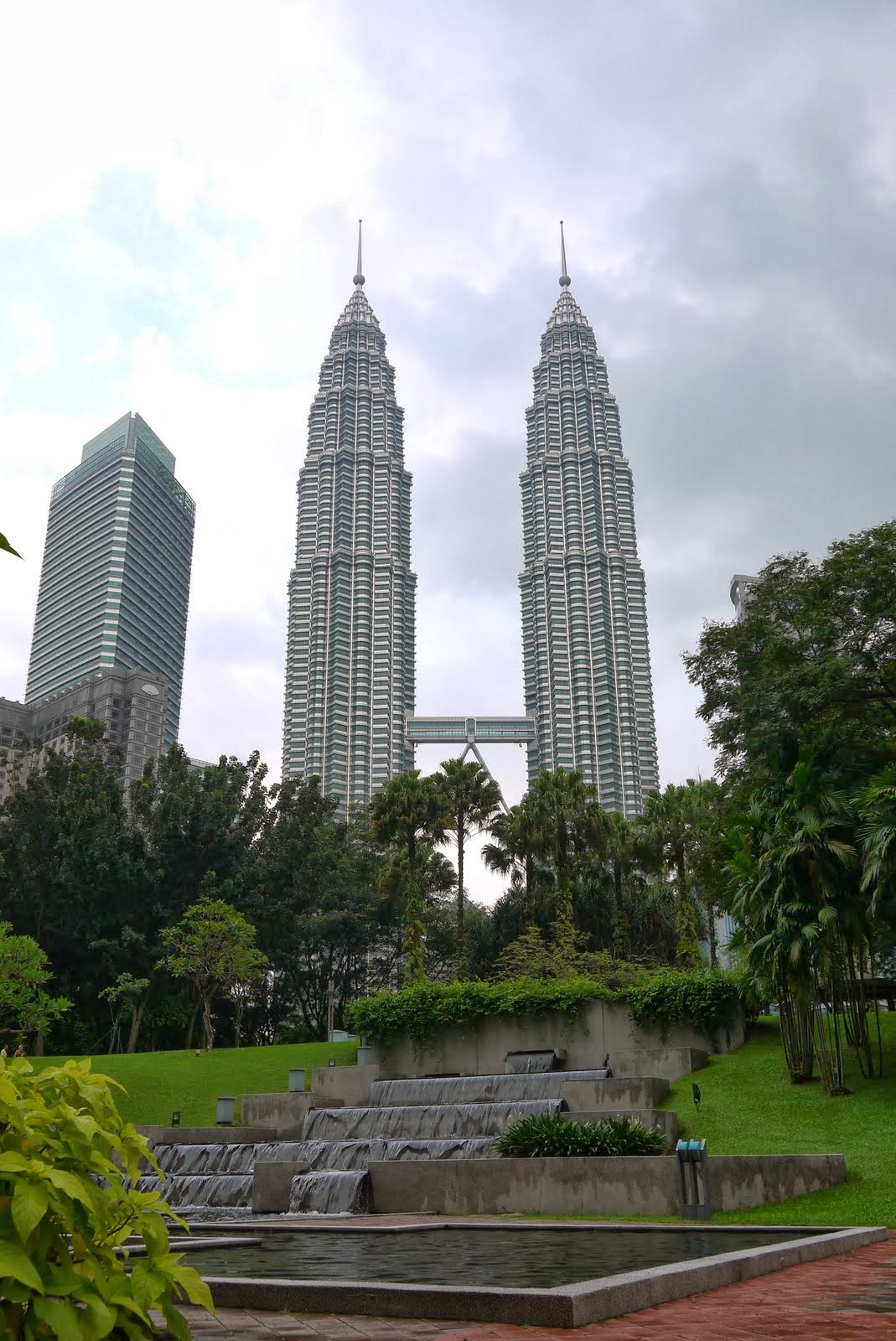 On the day we left Kuala Lumpur, we walked from the hostel to the very modern bus station where many helpful employees wanted to direct us to the right counter. We had a very pleasant surprise when the bus arrived. It was the most comfortable bus we had ever seen. The seats were about the size of first-class airplane seats, with foot rest and a lot of room to stretch. The seats were also reclining and had an integrated massage function. Very impressive! The road was quiet and comfortable.

The bus stopped at the Malaysian border where we got off, walked through the main building and went through immigration. We then hopped back on the bus to cross the bridge, stopped again, this time for the Singapore immigration. We had to get off the bus once more but this time taking our luggage with us. We filled out our arrival card and waited in line to get our stamps. It was a quick process giving the amount of people that go though at the same time.

We started our Singapore discovery with the Chinatown district, visiting colorful Sri Mariamman Temple as well as the very big, impressive and informative Buddah Tooth Replic temple. We then headed towards the Financial district, Raffles place and the many shopping centers. We walked along the Olympic Walk to the Shoppes at Marina Bay Sands before crossing a very modern looking bridge. We came back to the hotel, walking in front of the parliament and stopped in a real supermarket to buy some wine and food. 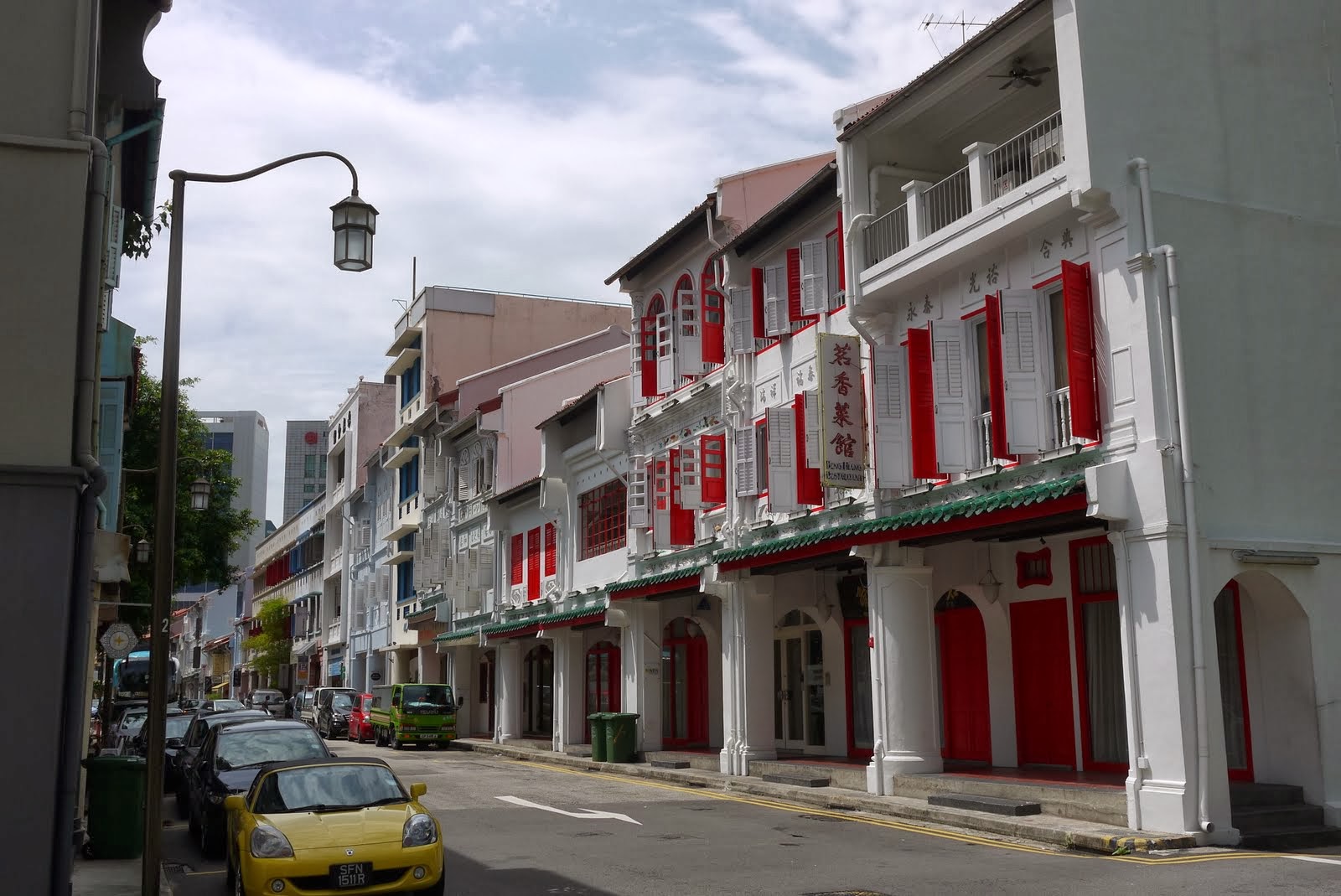 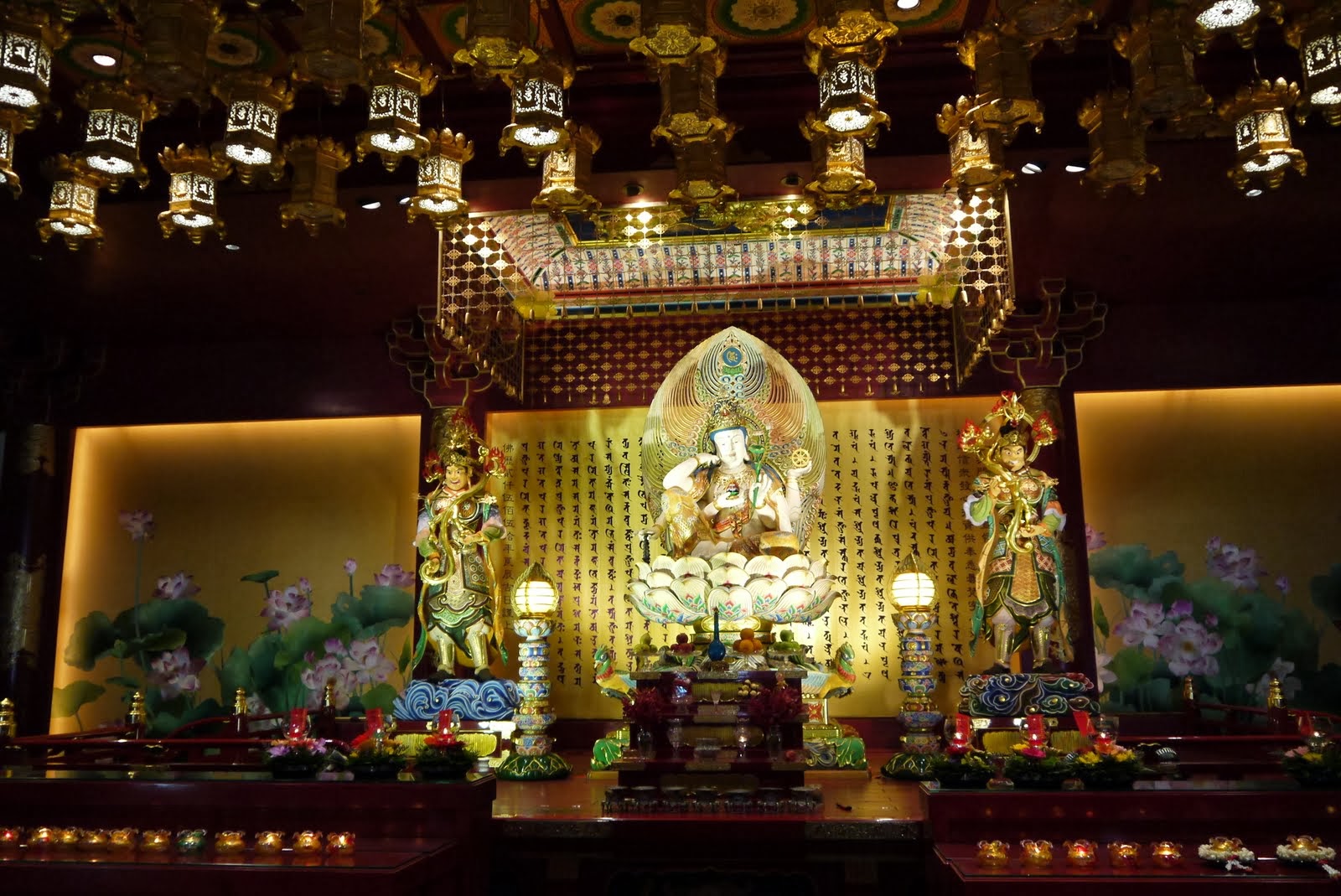 On our second day in Singapore we woke up late in our window-less room. We went for breakfast in one of the many malls before our walk in town under the rain. We walked by Little India and Arab Street, having a look at the big golden domed Mosque. It was raining on and off and, after a while, we were wet enough that we decided to walk back to the hostel and book some flights for our next destination.

We really liked our incursion back into modern society. We were amazed by the modernity of Kuala Lumpur and the cleanliness of Singapore especially after Nepal. Both cities were very easy to get around on foot and had great public transport from the airport. Our next destination won’t be as clean, but obviously not as expensive either!