66 days at sea : Crossing the Pacific on board SV Infinity

We left on board the sailing vessel Infinity in the night of January 31st. We said our goodbyes to dry land for what was an estimate of 8 weeks at sea. We didn’t know what to expect or even the basics of being on a sailboat. 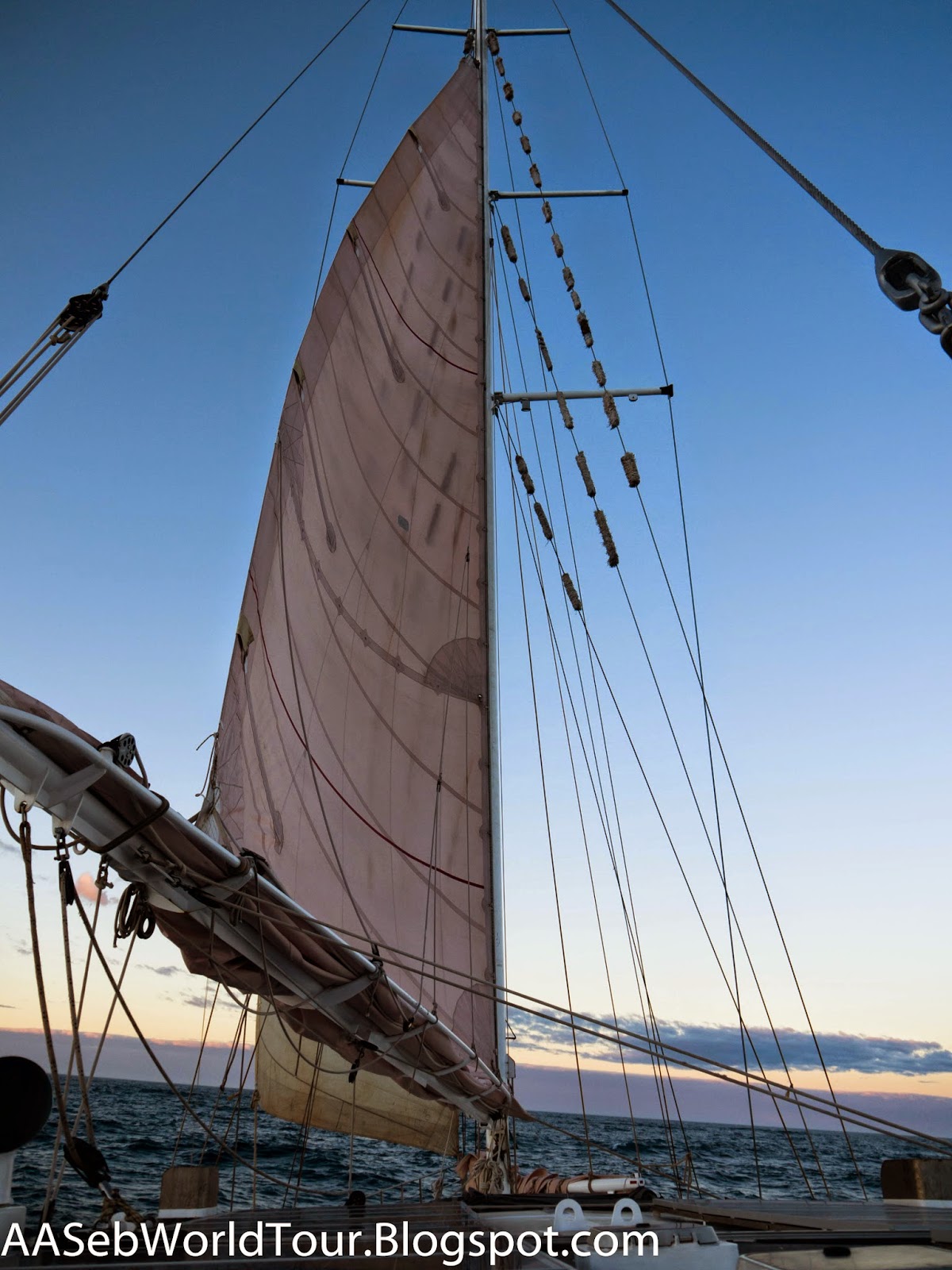 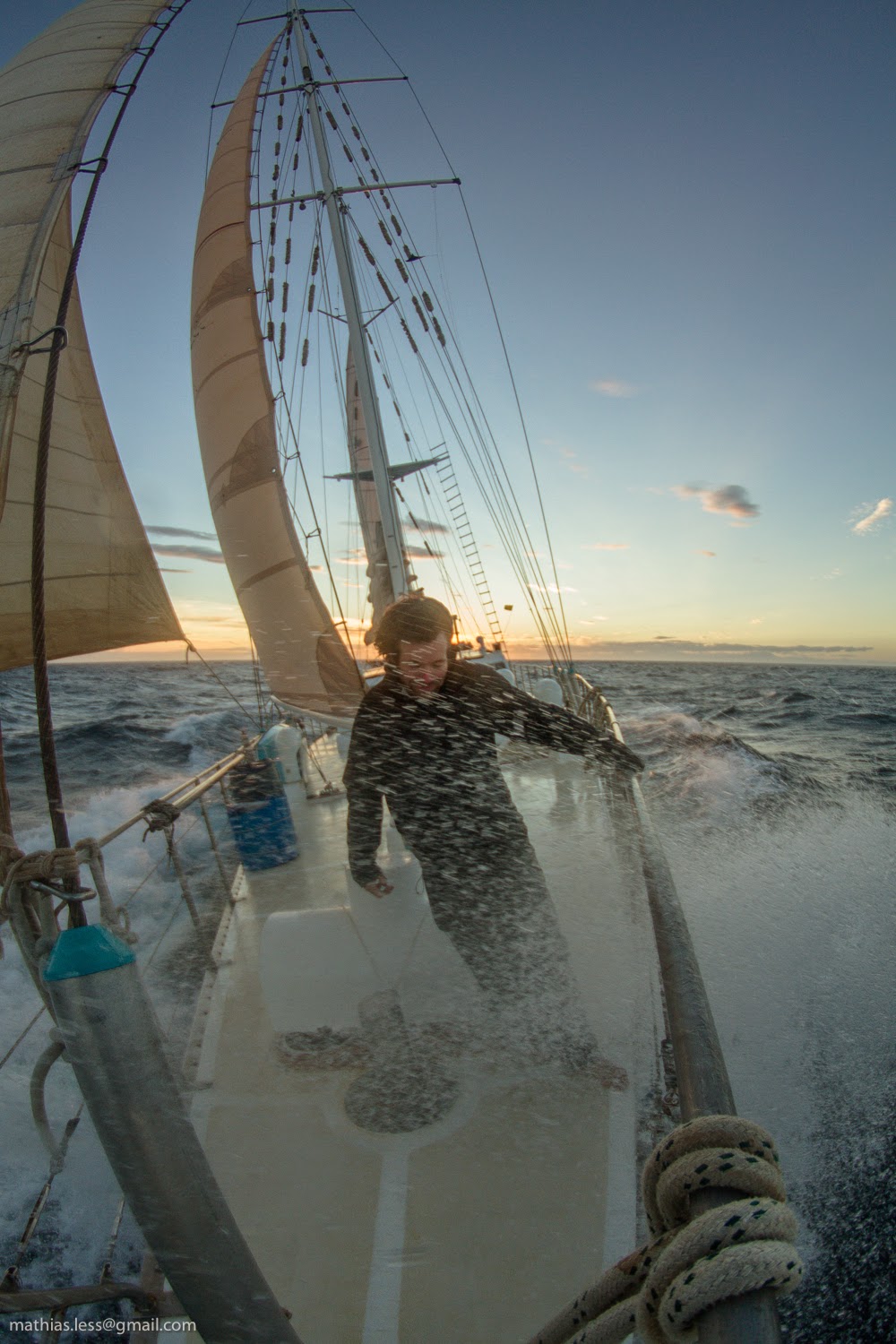 During our first day entirely at sea, we encountered our first rough sea. We ran everywhere, trying to secure everything that could go flying around and become a hazard. Almost the entire crew had to take breaks and go sit outside for a while when cleaning up as we were getting slightly seasick. Luckily, we weren’t seasick except for a couple of episodes in the first days. 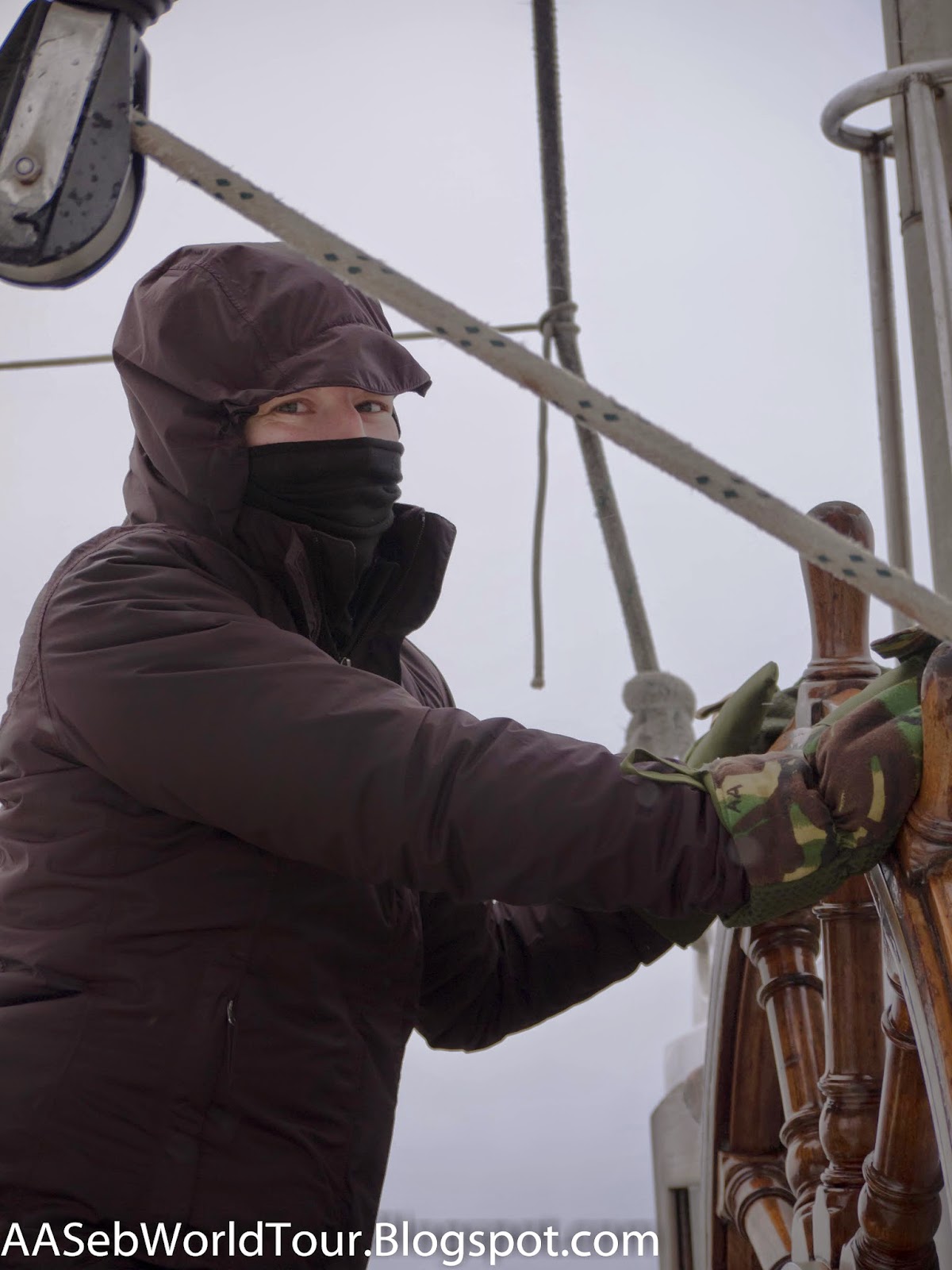 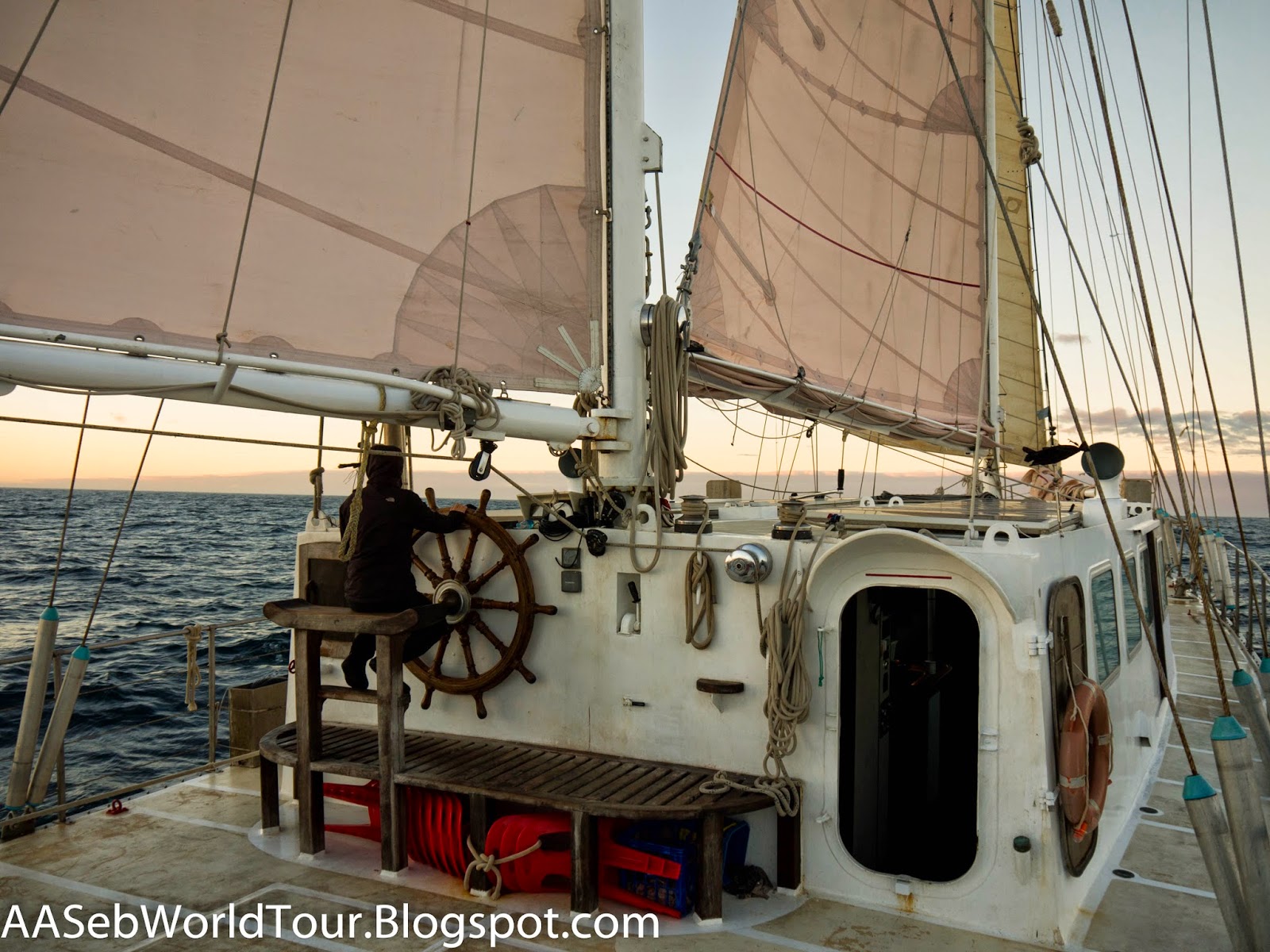 During our two months on board, we often had to change or adapt our plans to the weather. A sailing vessel being dependent on wind, we sometimes had to tack, which means sailing in a zig zag patern. Other times, the wind was so light that we had the choice to either use the motor or let the boat drift until the wind picked up again. 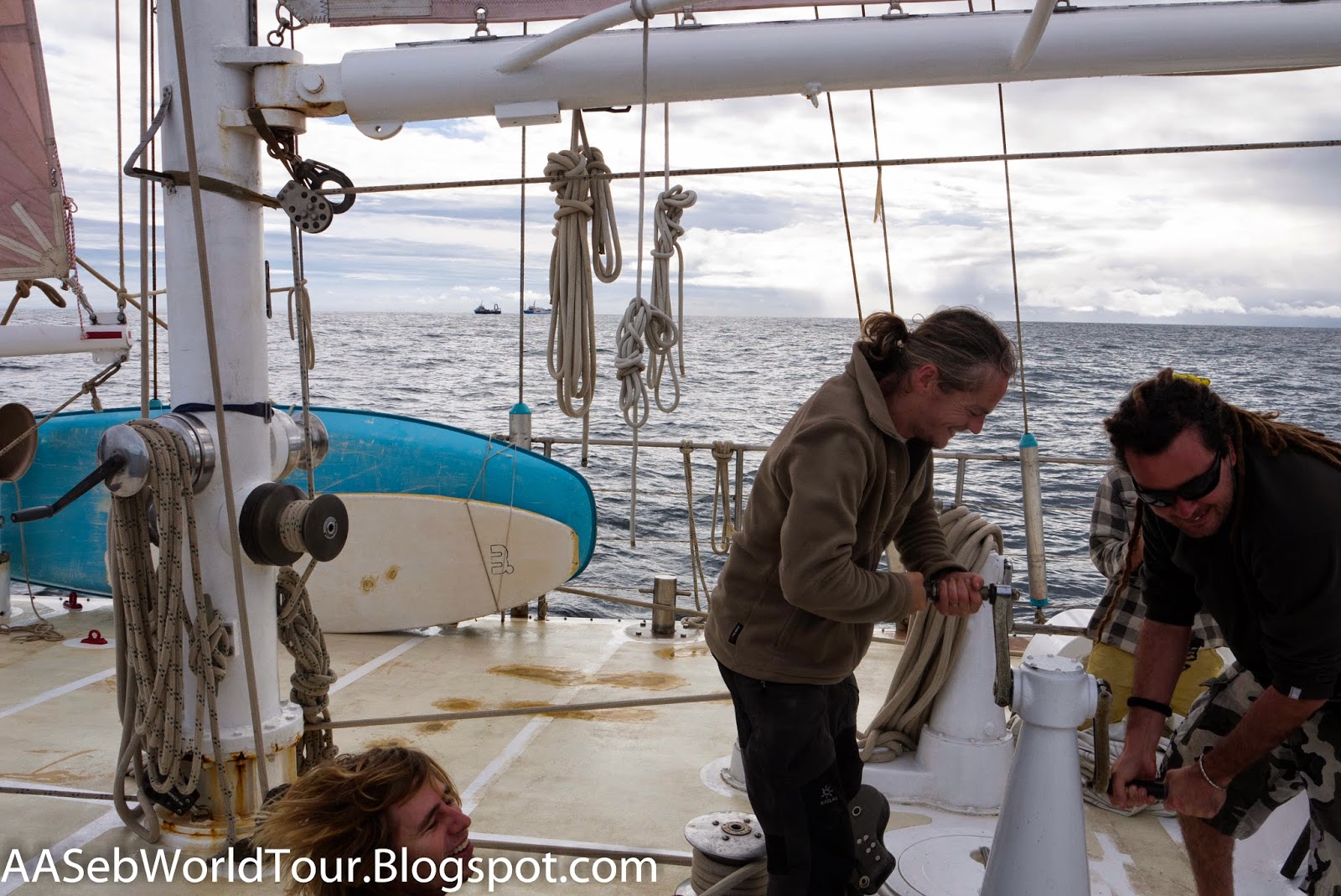 Learning the ropes of sailing is not easy and was very stressful at the beginning. Every little thing out of the ordinary made up for a lot of stress, for example, trying to stay on course while other small fishing boats were coming in to have a closer look at our big vessel. We learned a lot and soon we were able to steer on our own, with a supervisor team always available to help us when needed. 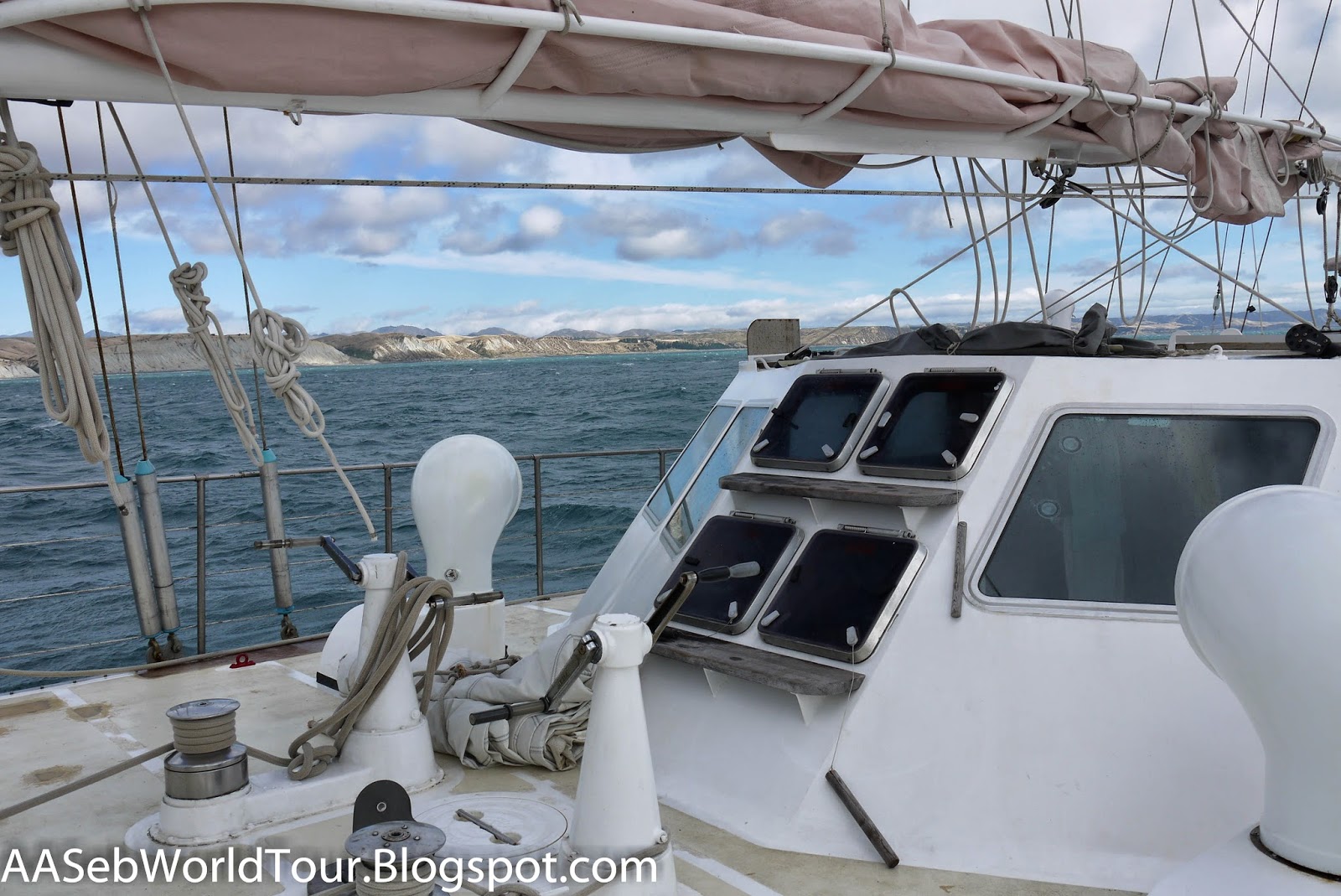 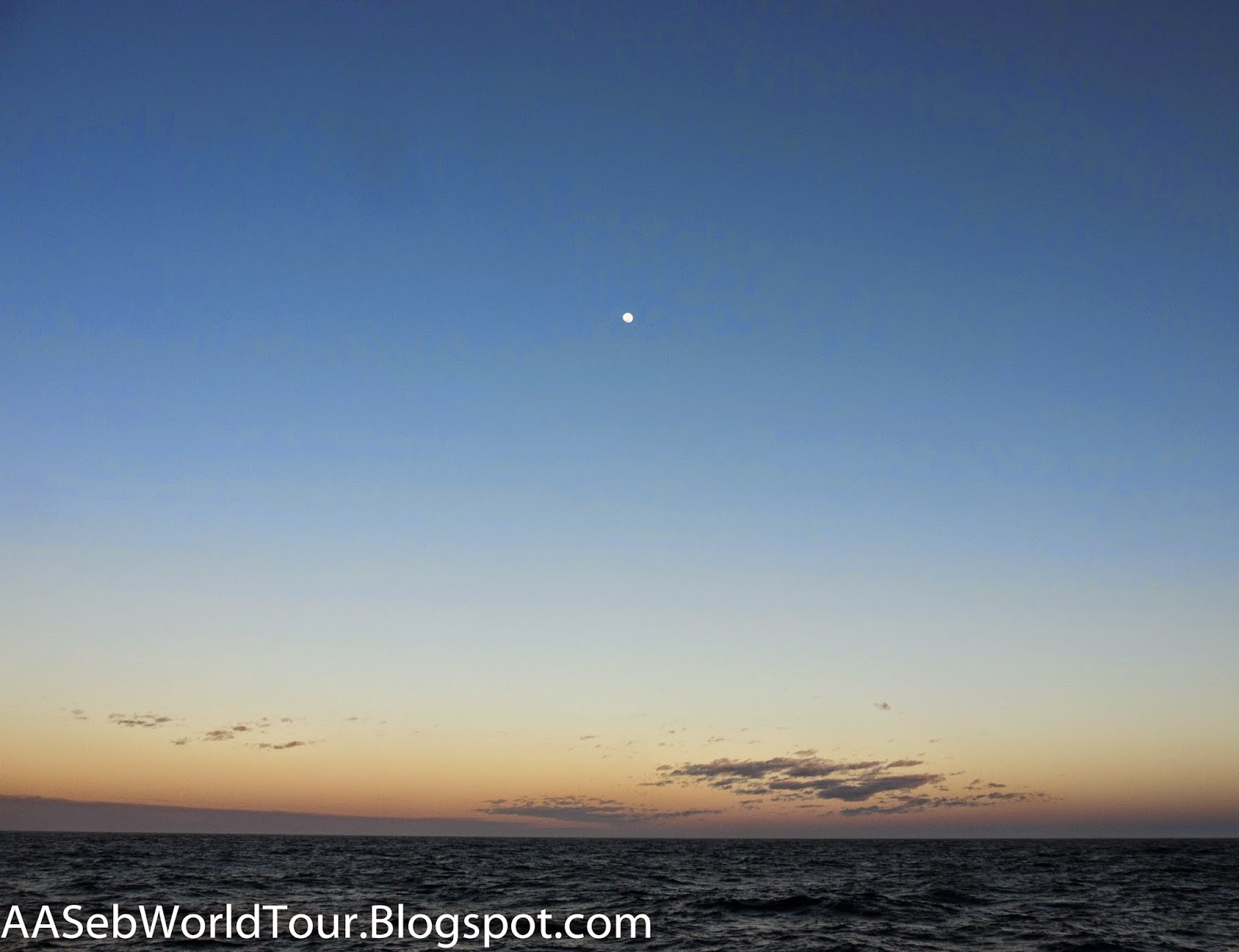 After a few weeks, the days started to blend all together and it felt like all we did was our watch shifts, daily duties, sleeping and eating. 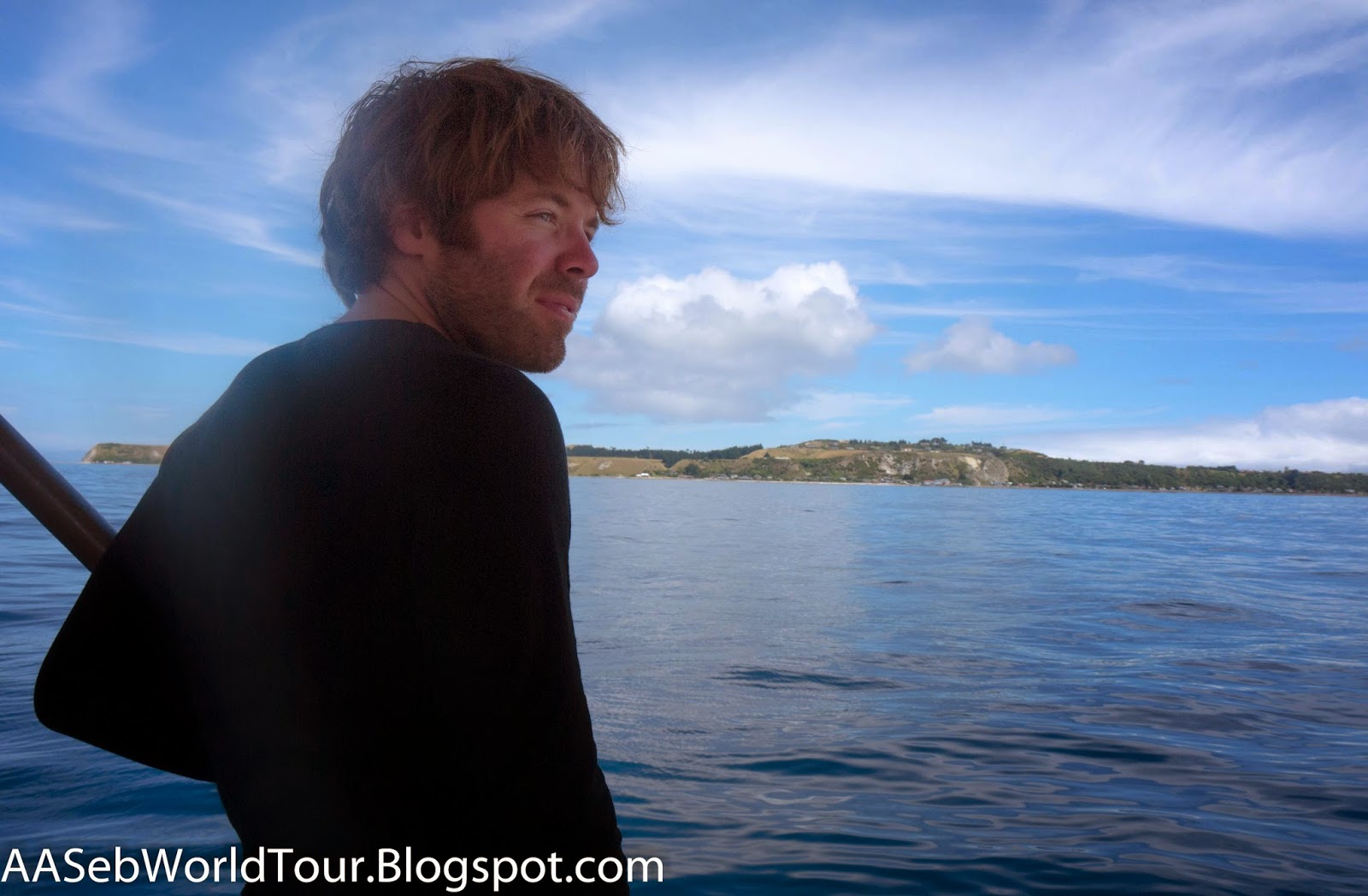 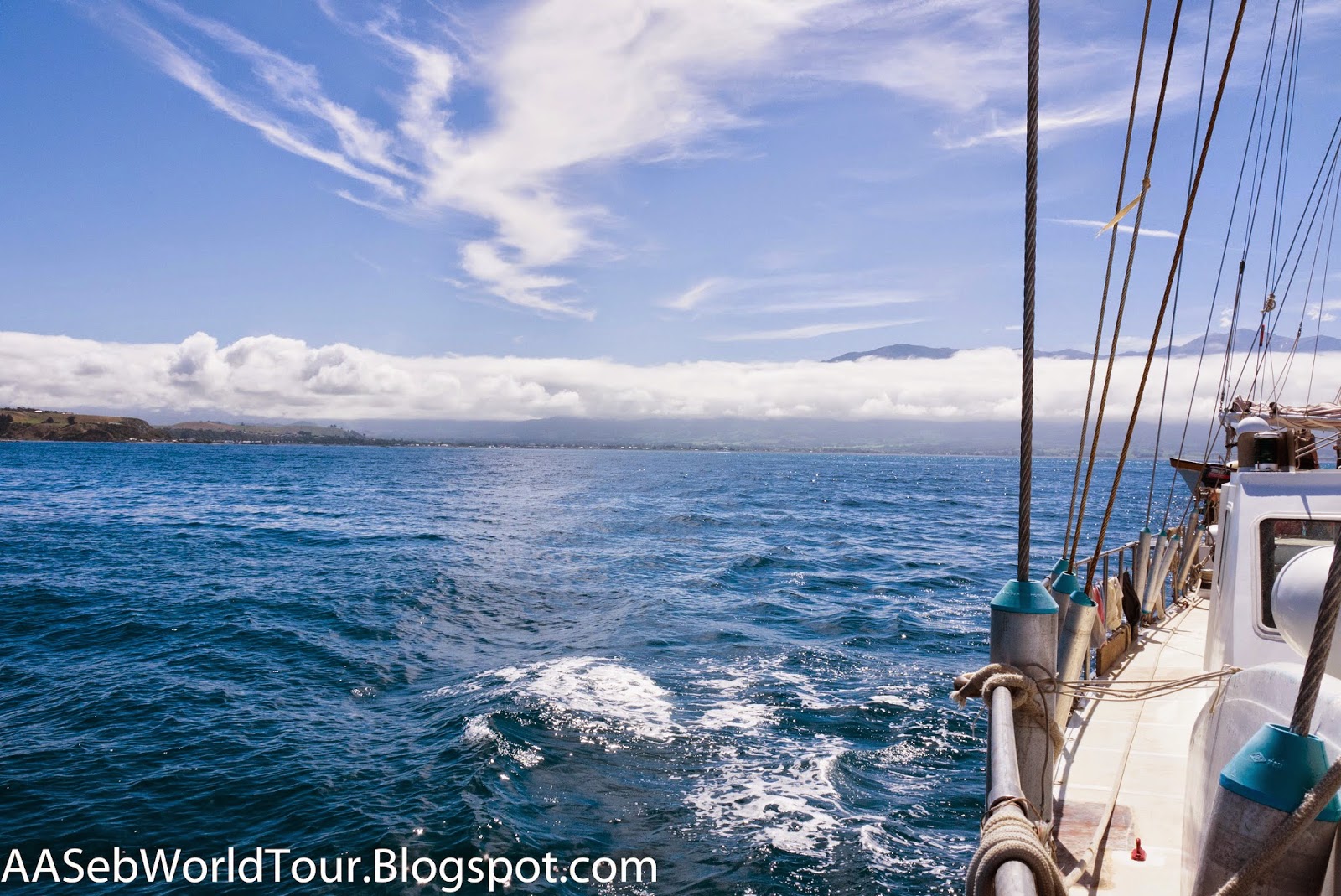 With a crew of 16, we had to organize ourselves with watch and duty schedules. The watch schedules changed a few times according to the needs. At the beginning, we were in teams of two, one steering and the other keeping an eye out for any threat. When we arrived in the icebergs area, we had to be in teams of three, adding one person for the radar watch job. 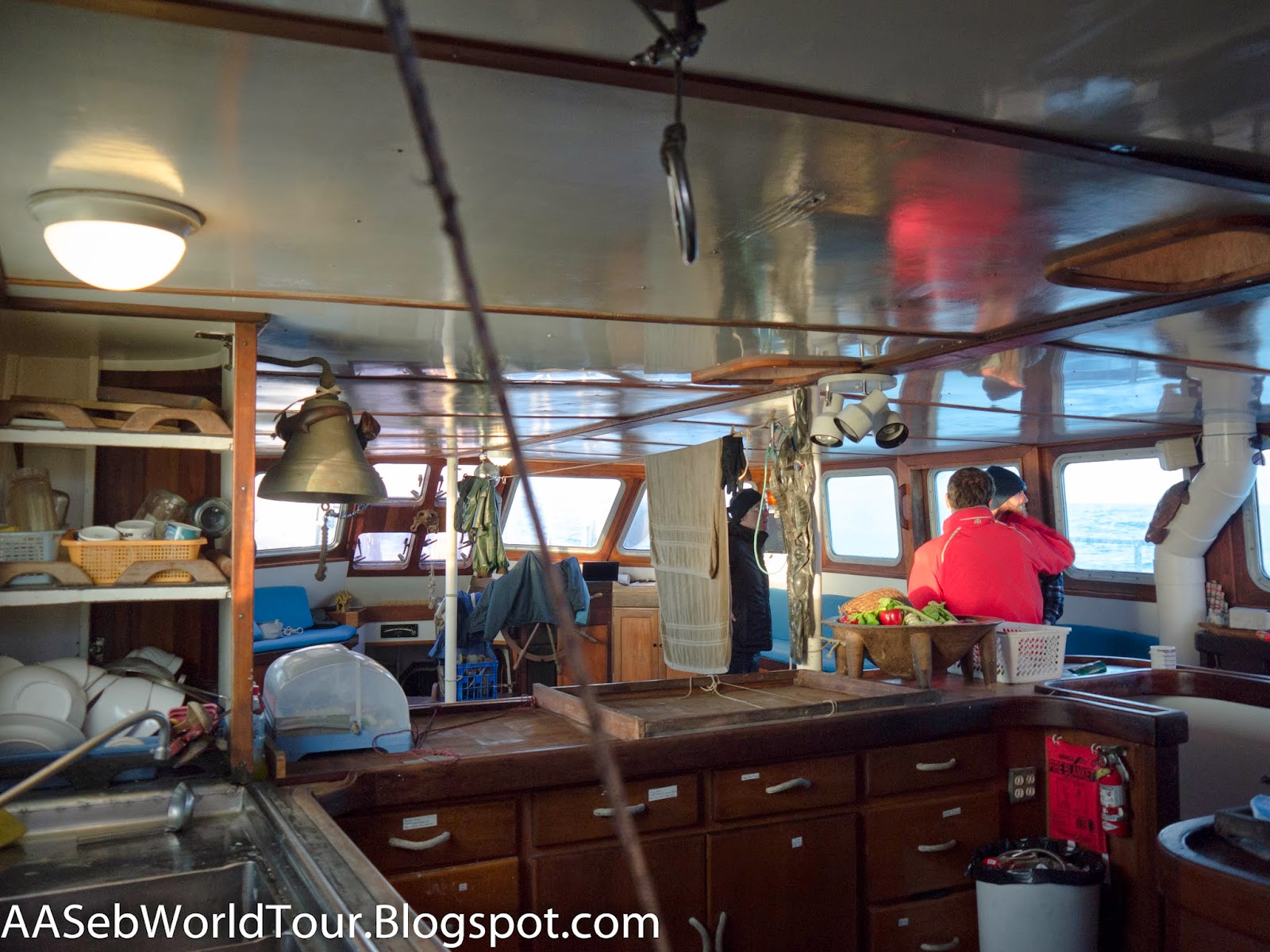 The daily tasks that needs to be done on a sailing vessel are numerous and varied, ranging from baking bread and making coffee, cooking the meals for the crew, cleaning, maintaining the equipment etc. Every week, when getting the new watch schedule, everybody would pick a daily task they wanted to do. 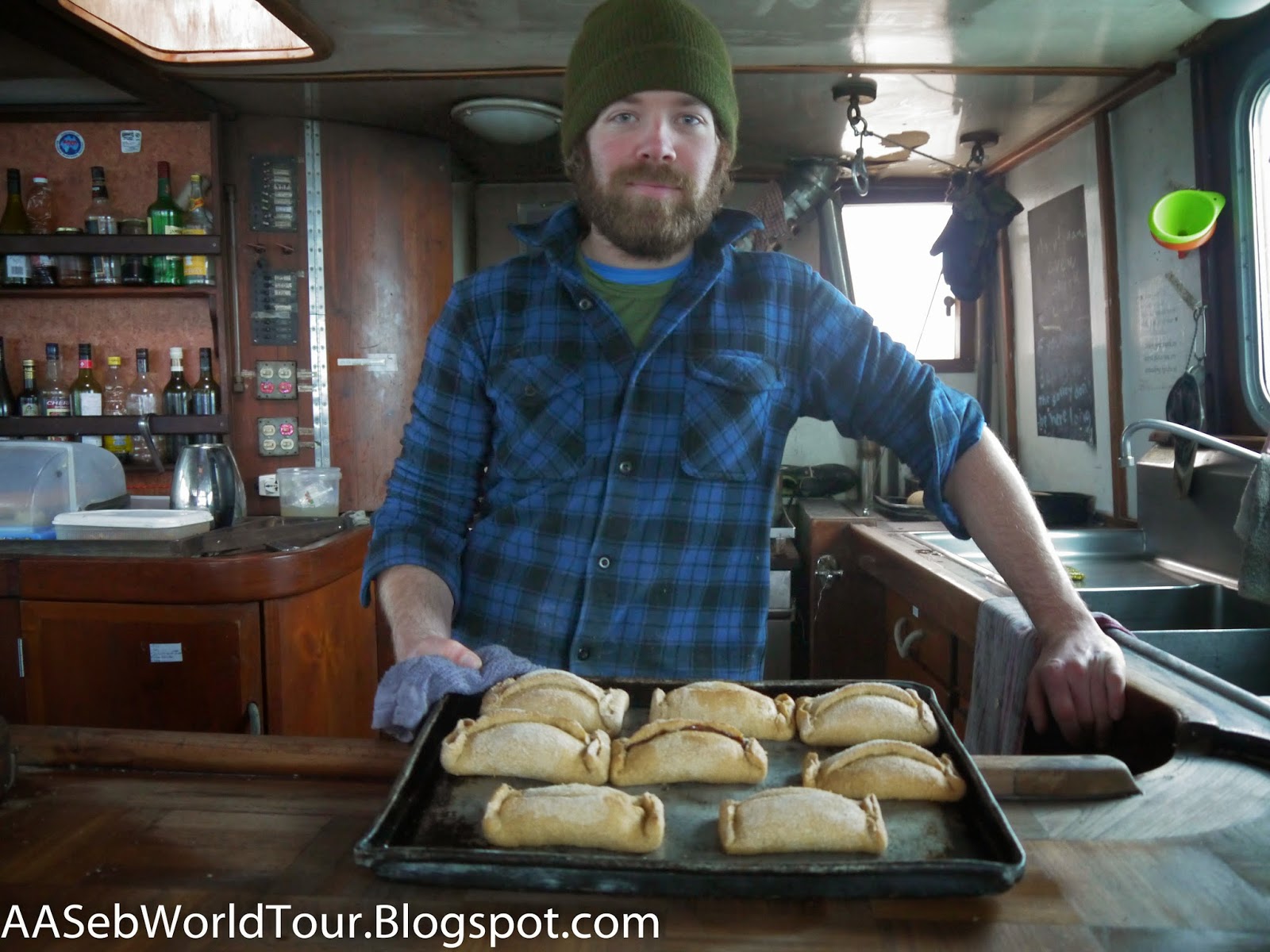 It can be hard to live in a closed community like on-board Infinity as we never have anywhere but our cabins to go and rest, or have some alone time. Between the stress and the lack of sleep, there were some tensions sometimes, but surprisingly, everybody got along just fine. We will be happy to have some time to ourselves without having to steer, but sad to let our new family behind. 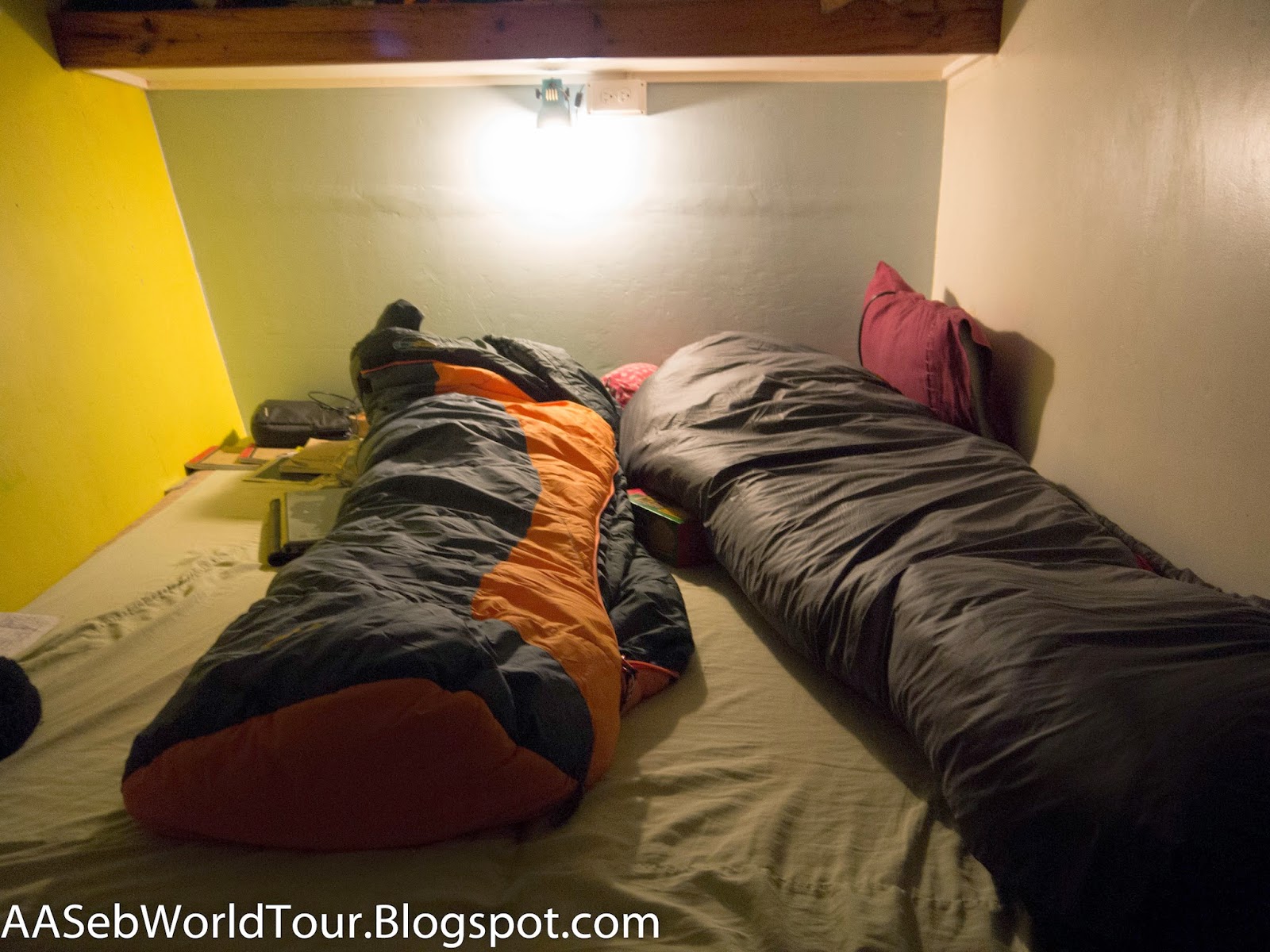 After a few days of sailing along the New Zealand coast, catching some fish along the way, we caught up with the MV Duke to help Greenpeace with their protest against oil drilling and the surveying of the ocean floor near Wellington. Infinity’s part in these actions was limited to following the main vessel for a few days, transmitting messages from the local communities of Kaikoura. 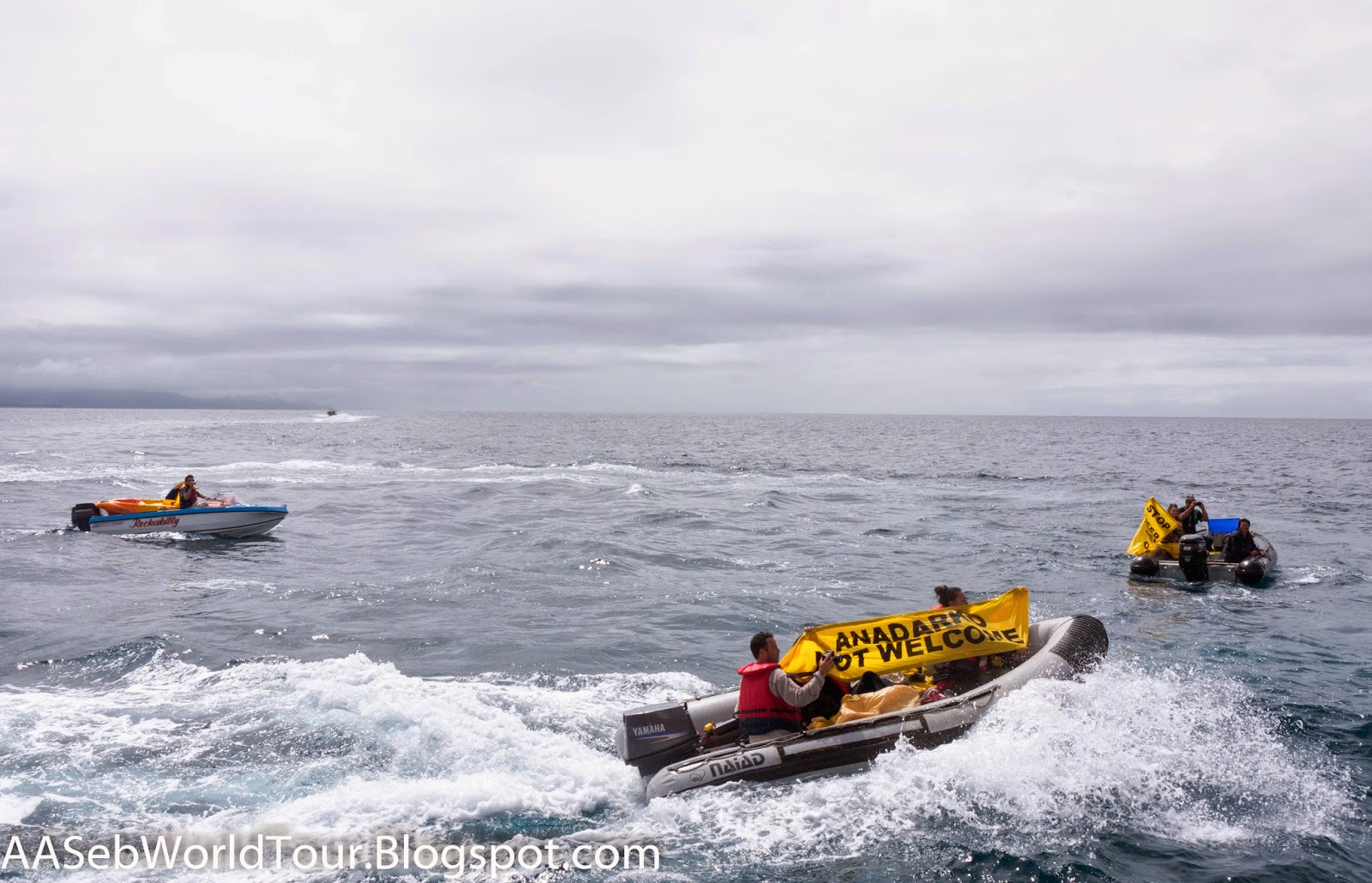 After a few days circling the area, the main boat left at a impressive 10 knots speed. We all wondered why, but quickly realized what was going on when we saw the waves getting bigger and the sky getting darker. It was forecasted to be 15 knots wind but it was more like 45 knots. It was very challenging to drive the boat in these stormy conditions as we had to hang on tight every time the boat would rock. 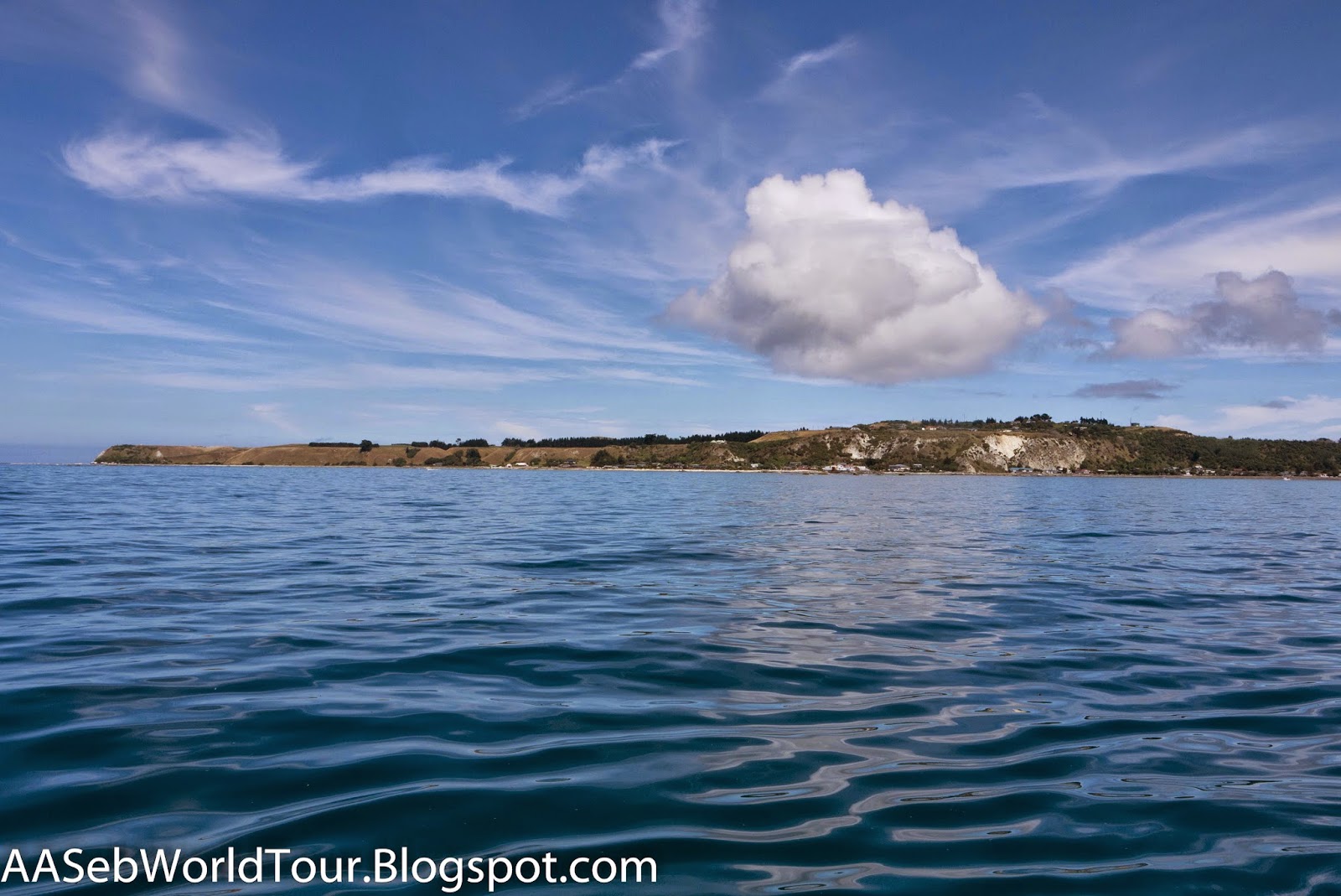 When we were getting closer to the village of Kaikoura, we spotted some Hector’s dolphins. The dolphins followed us for most of the day and some of the guys ended up going in the water with them. Later at night, during AA’s watch, the dolphins were back. It made it very difficult to focus on the on upcoming big boat, lowering and changing the sails, while hearing the dolphins flip flap on both sides of the boat! 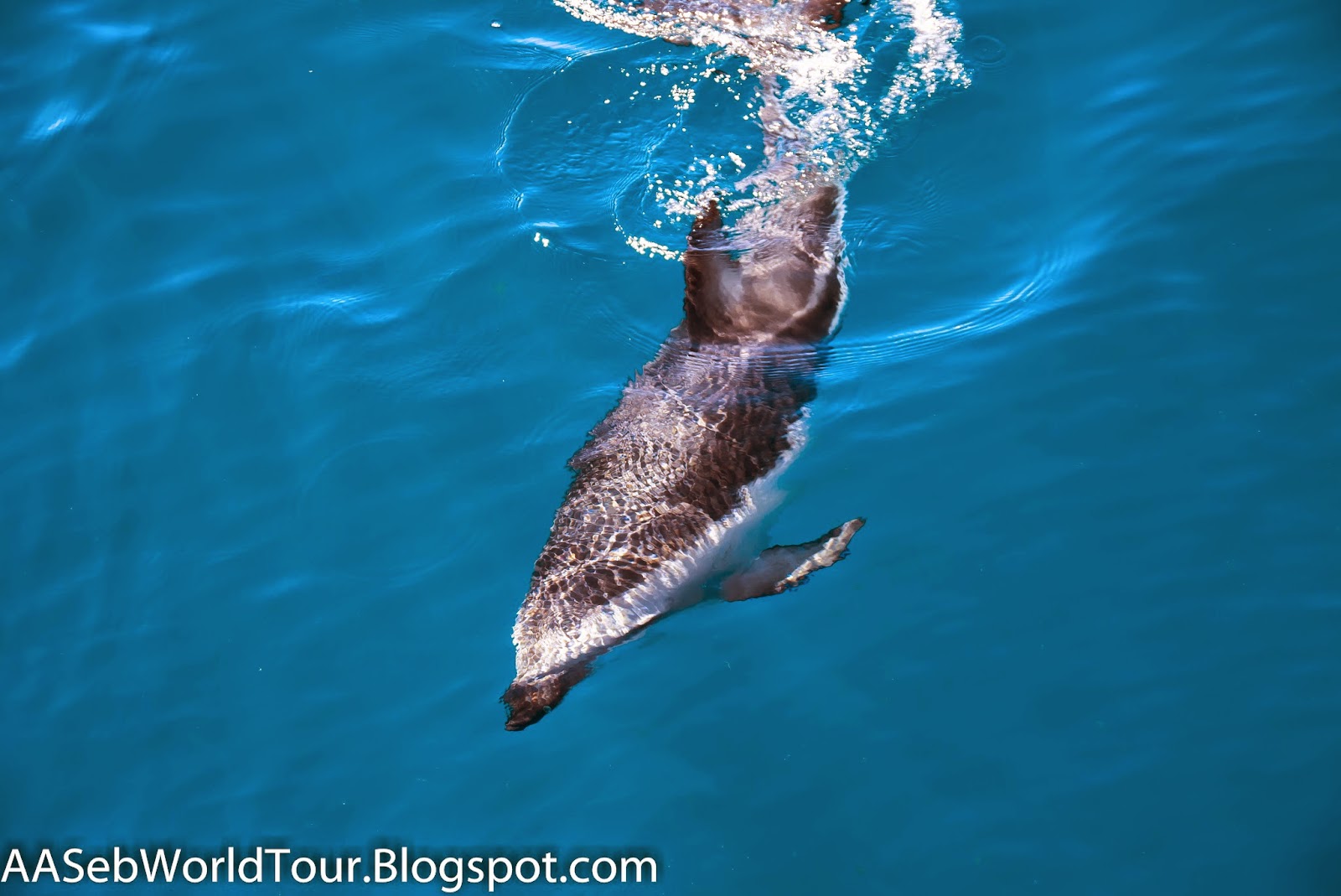 South of the 60 parallel, home of the icebergs

We met with some heavy storm weather on our way to the Ross Sea. We were keeping the lights out to help us see potential icebergs as the sky was very dark and cloudy. It was a little bit daunting to be sailing on a fairly rough sea, in pitch dark nights, in the middle of the Southern Ocean. 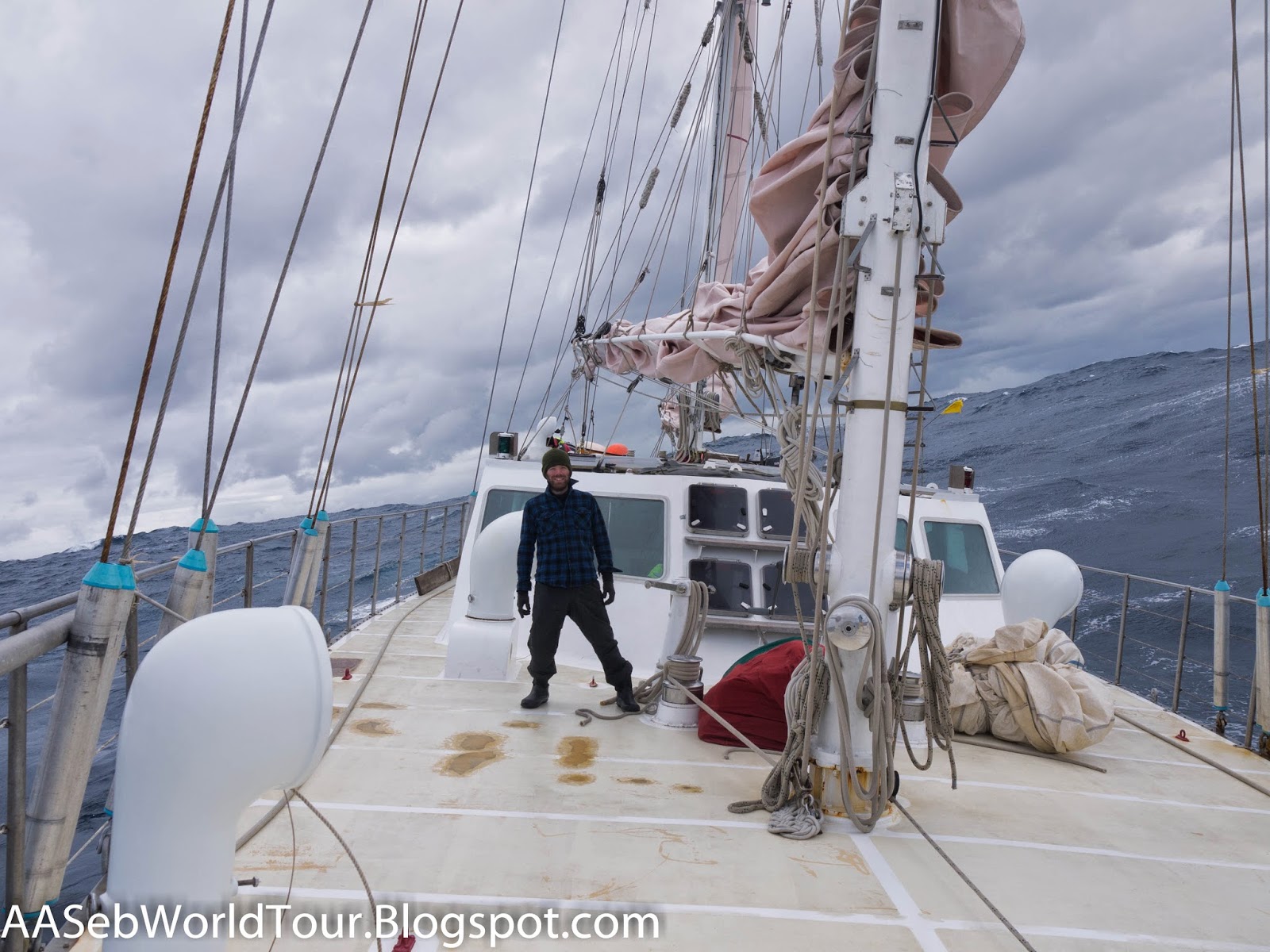 During the storms, we would sometimes motor instead of sailing in order to be able to avoid the potential icebergs. One day, we were motoring and the wind was so strong that we were actually going backwards and had to look behind us for icebergs. 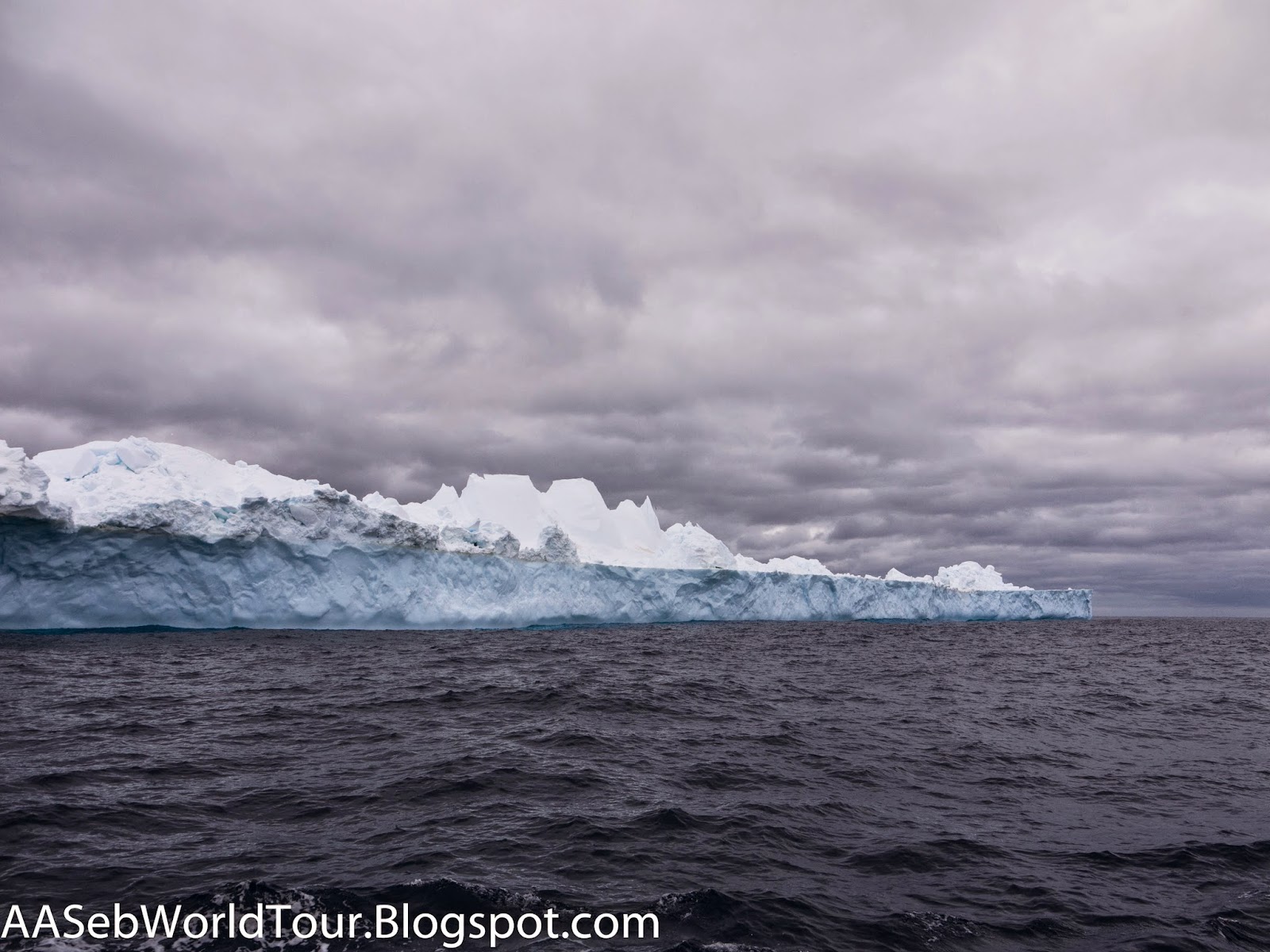 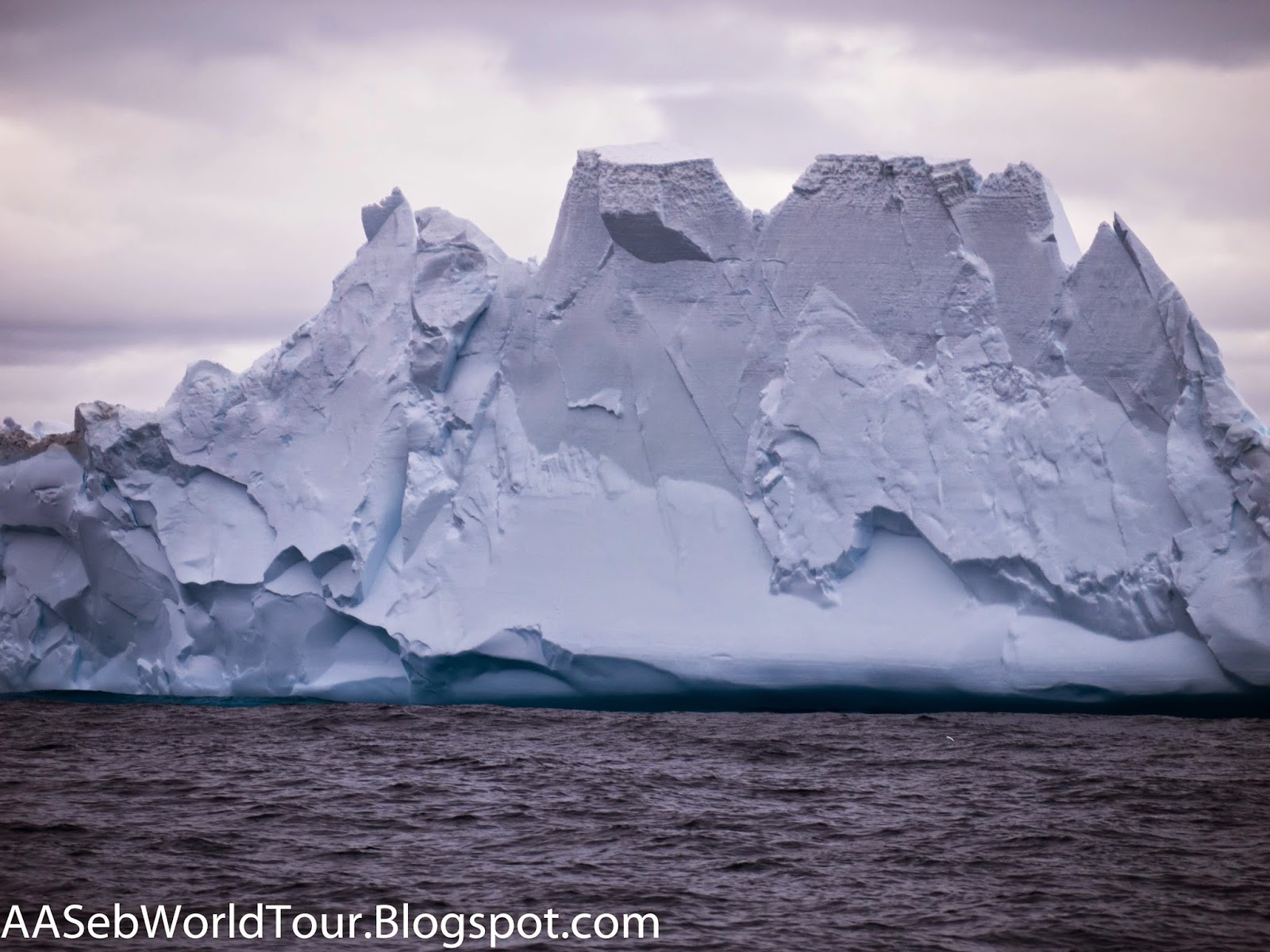 We saw many massive icebergs on our way South. The shades of blue in the ice, the waves smashing into the iceberg and the many small pieces floating around were incredible. We spent some time circling around some of the first icebergs with the boat and everybody loaded their camera cards with pictures. Most of our shifts were spent dodging icebergs, and some days we could easily count 10+ at any given time. 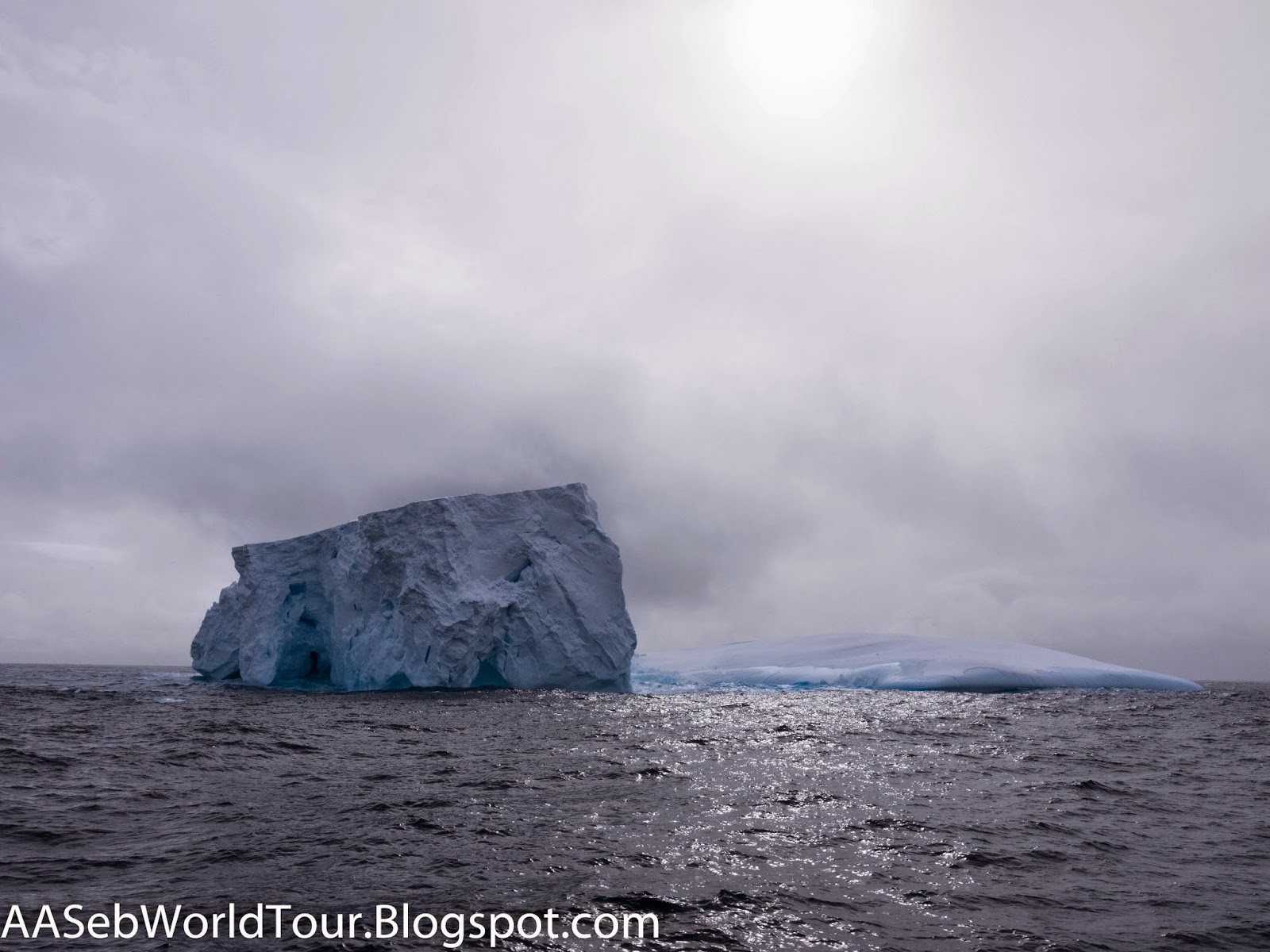 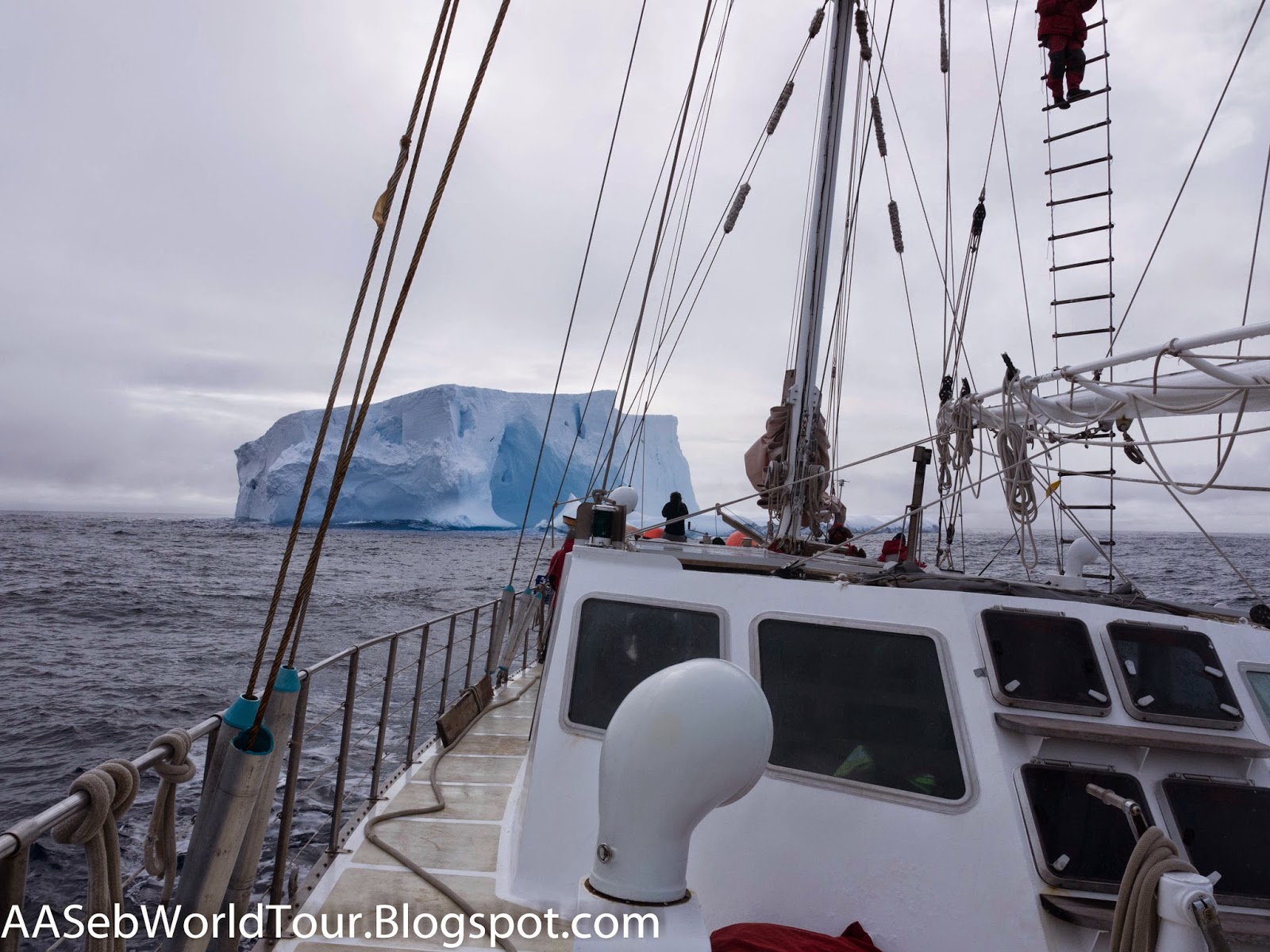 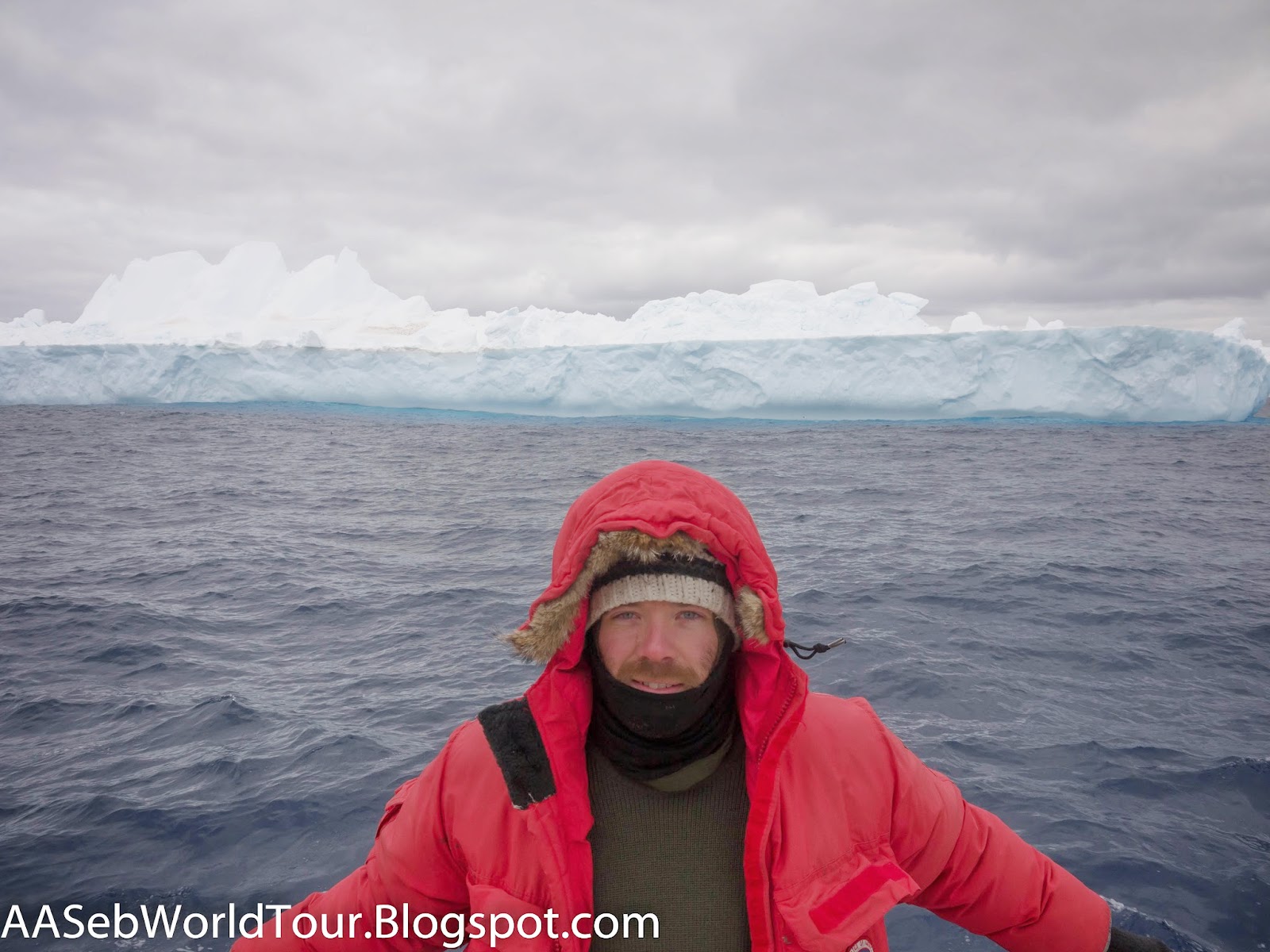 With our new dolphins friends in Kaikoura, we saw a lot of wildlife. Some whales were obviously curious to know what was that big thing in the water, while others didn’t look interested at all. 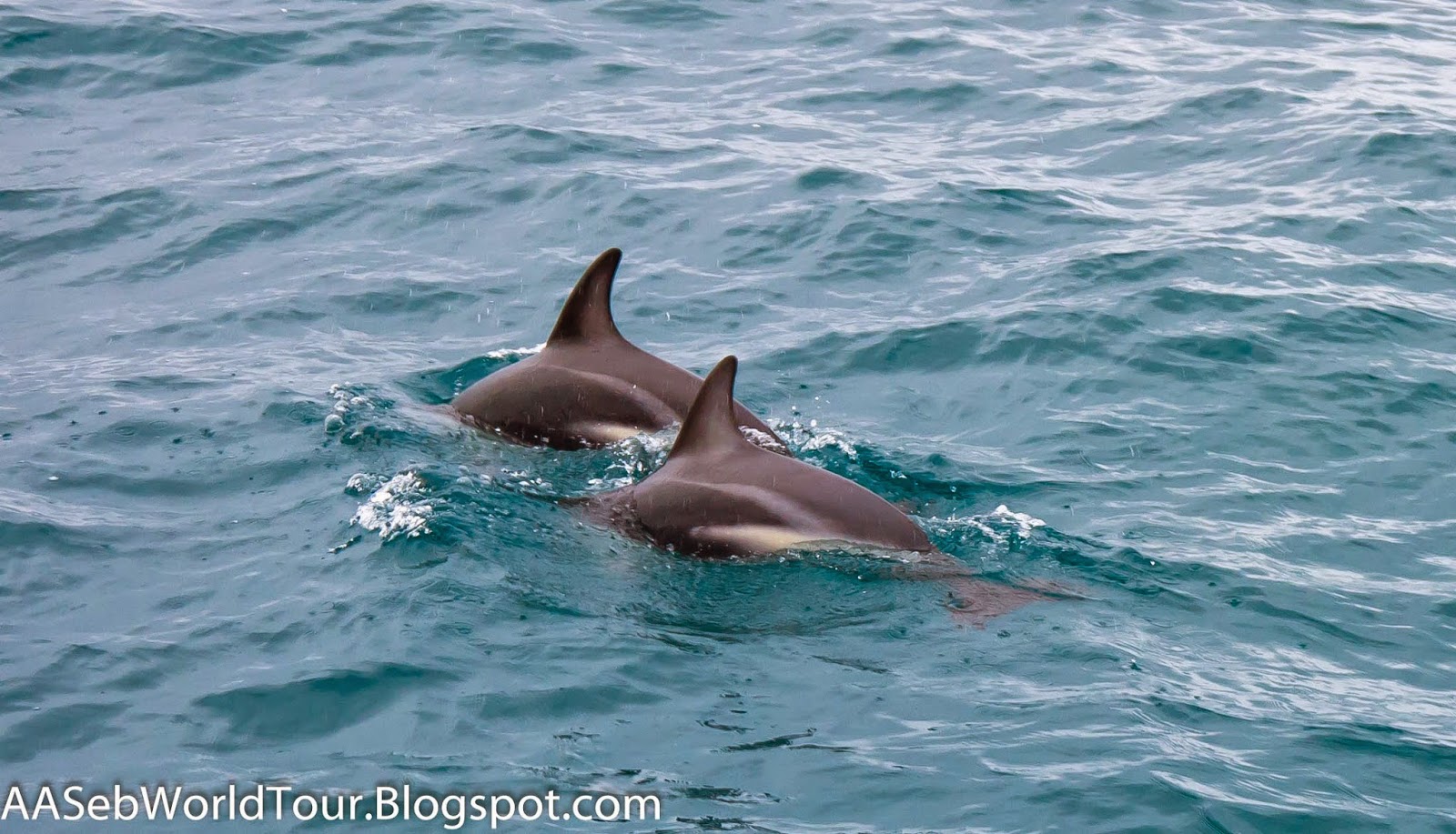 One day, while we were sleeping, we heard some of the crew of the deck getting all excited. We ran up and watched the five fin whales feeding close to the boat. We were often surrounded by many albatrosses and sea birds such as the Antarctic and Cape petrels. 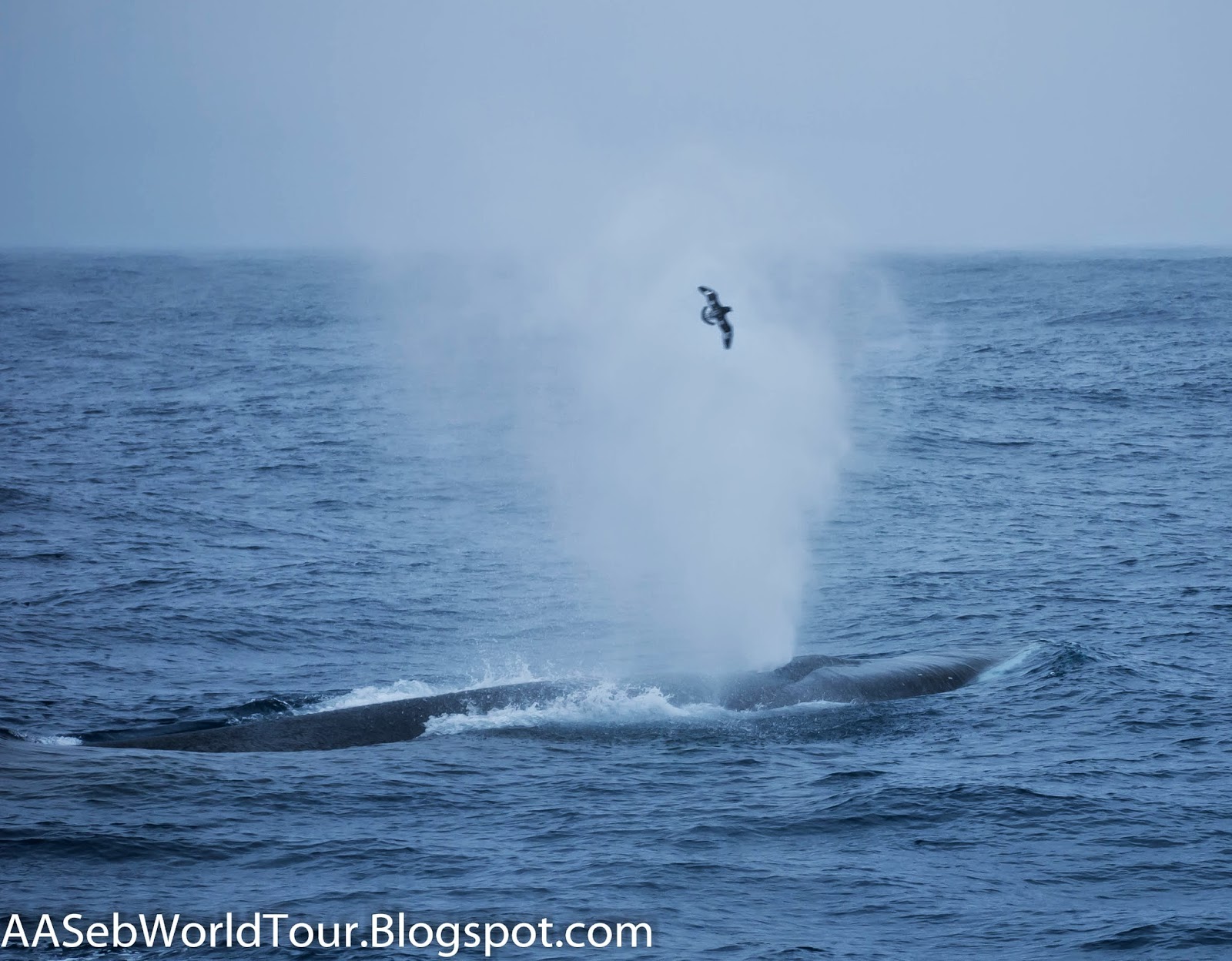 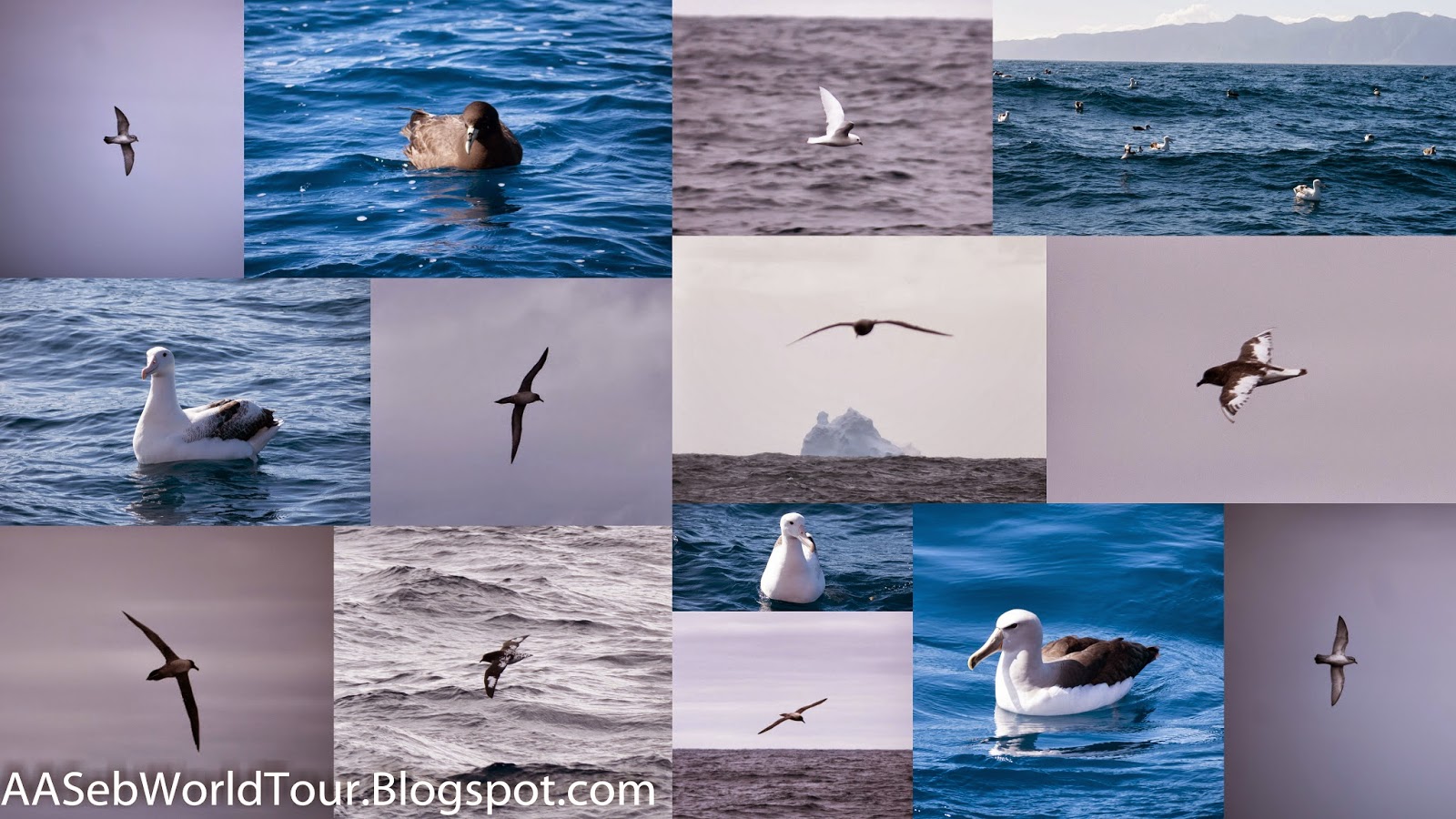 We had very good moments and very challenging ones too. Some of the funny memories were not so fun when they actually happened, like Seb’s unwanted salty water bath in the middle of the night after a huge wave washed the deck. He had time to hold onto the railing which allowed this story to be a funny one instead of a dramatic one. We also encountered some snow, enough to built a snowman on the deck and have a good old snowball fight! 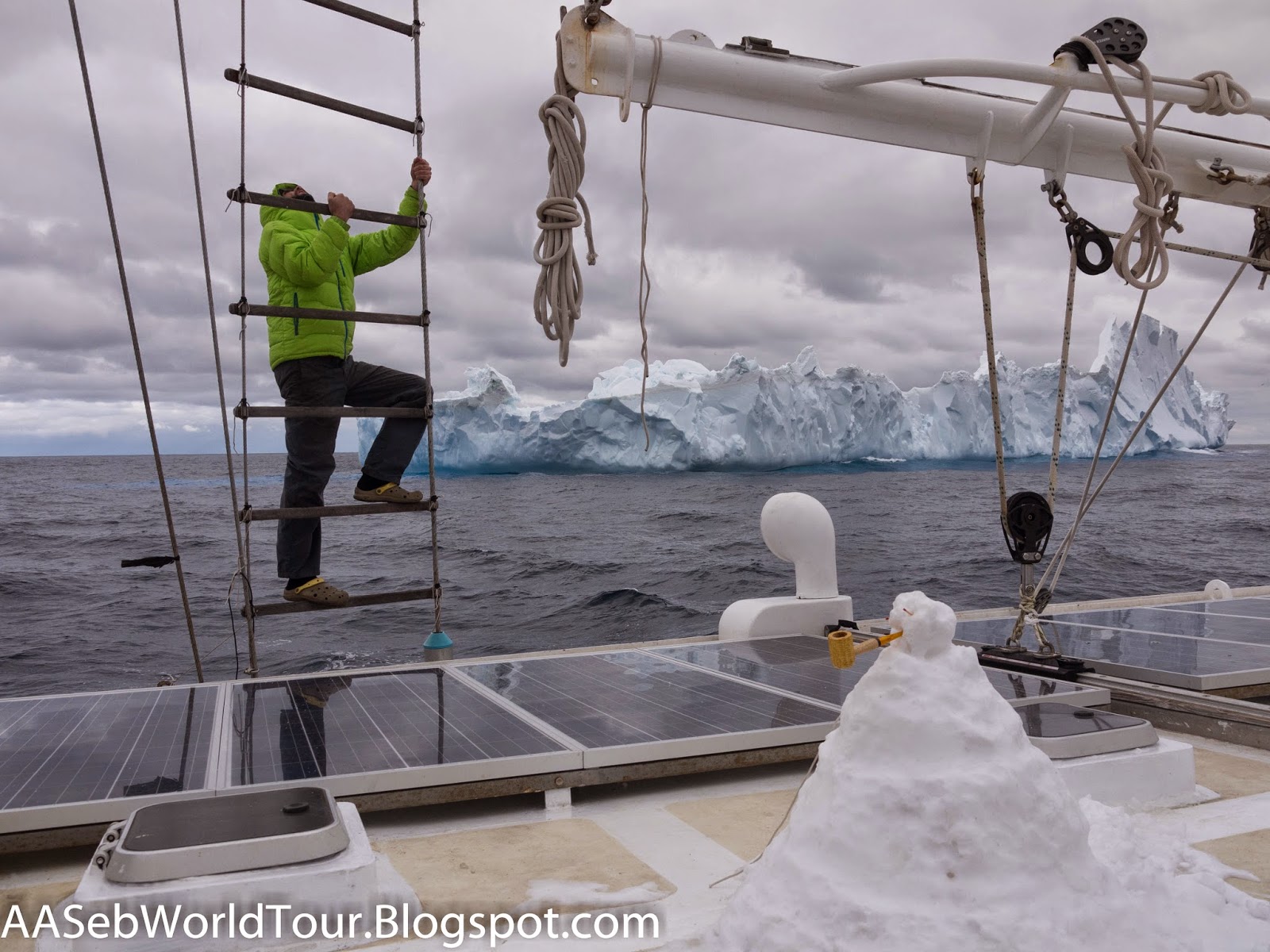 During one of our night shift, Seb noticed some lights in the sky. We were lucky enough to witness some Southern Lights. They were quite faint but still very impressive to get to see them in summer time.

We were ecstatic when we got our first sighting of land! During the whole journey, we had just spent a few hours on land in Antarctica (details and pictures to follow in the next post). We hadn’t seen mountains or land in so long that it was actually very odd. The smell of land was also very new, we had almost forgotten about it. We entered the fjords of Patagonia on April 6th and spent two days steering while looking at mountains before arriving in Puerto Natales the next night. 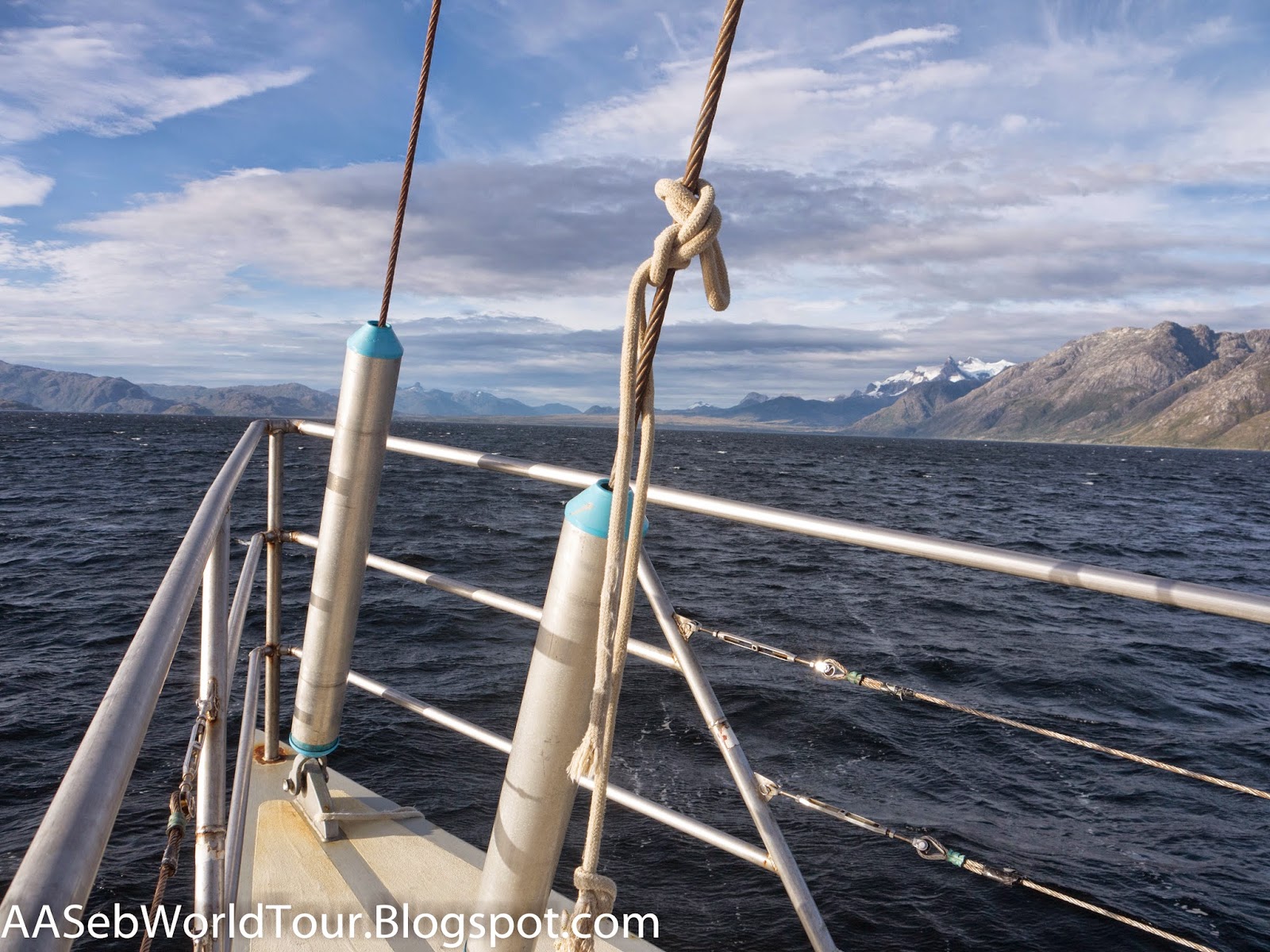 About halfway though our journey, we were lucky enough to be able to reach Antarctica and spend a few hours on land. This day was so awesome that we though it needed it’s own post. Keep an eye out, it will be coming soon! 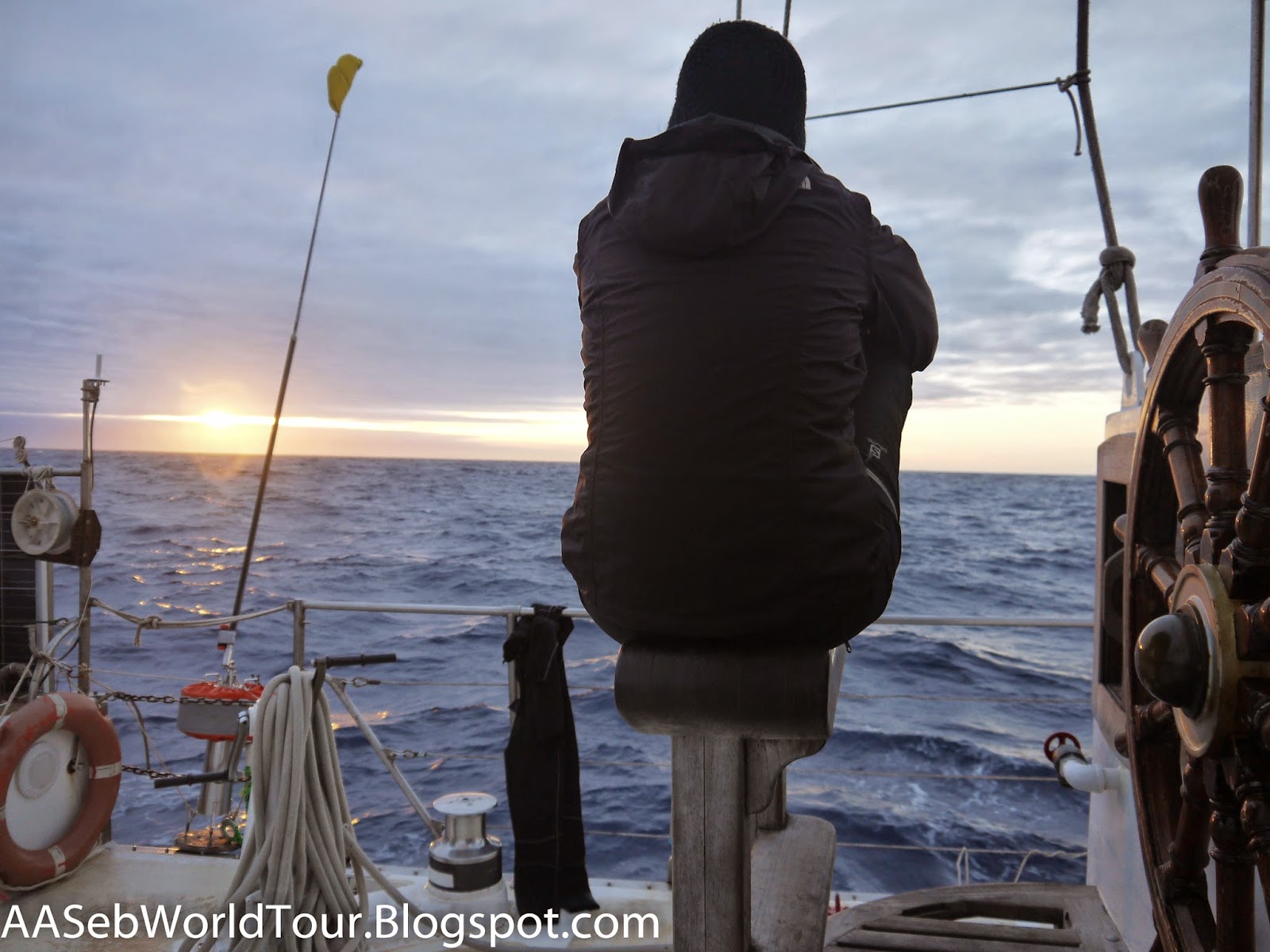