The first three days, from Besisahar to Dharapani

We were really exited to start walking on our first morning. It was something we had been looking forward to for over a month now. It is a great adventure, walking hundreds of kilometres surrounded by some of the highest mountains of the world. What is awesome is also going through all the different climates. We started in a jungle, at 760 meters in altitude in Besisahar, and hiked all the way to the white top mountains in a matter of a few days.

On our first day, the trail already offered us great views of the valley and an insight into the life of people living in small Nepali villages. We took the opportunity to stop and have tea in a small family home and discuss with them about their lives. We stopped for the day around lunchtime in Upper Ngadi, a really small village with only one lodge. We didn’t know what to expect from all the restaurants and small lodges regarding the food. We were thinking that we would eat the same thing for three weeks, but the menu is quite extensive considering the remote location of the villages. We already walked 12.6 kilometres today, carrying our own backpacks. We were quite satisfied we could make it that far for our first day. We realized right away that our bed time would be really early on the trail when we went to bed… at around 8:15 pm. 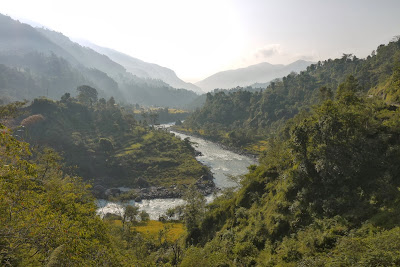 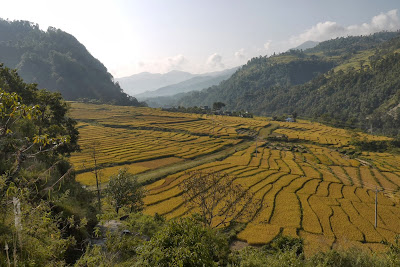 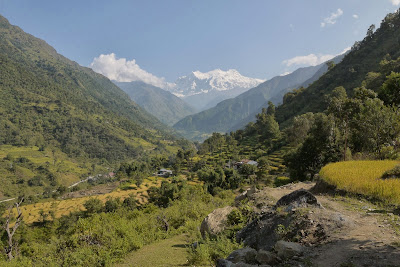 The mornings were quite similar every day, as we picked the same things for breakfast and were getting up at around the same time. On this second day, we were feeling great and were still excited about this adventure. We walked with a good pace along the river that we were going to follow for most of the trail. We were going up in altitude, but the river seemed to stay with us, flowing down the other way. We made it to Jagat on this second day, 13.8 kilometres further up in the valley, and at an altitude of 1281 meters. We stayed at the “North Face” lodge, the sign outside even had the official logo, just as all the clothes in Kathmandu. We were really happy with the basic room and its three windows providing great views. We also enjoyed our hot shower in the shared bathroom. The menus were quite similar so far, but the food is always a little different even when ordering the same meal. It was, again an early bed time as we were quite tired. 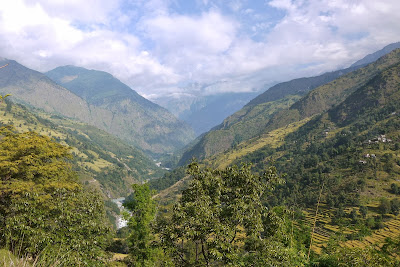 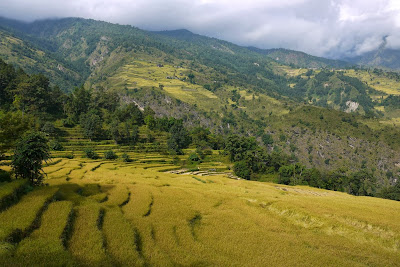 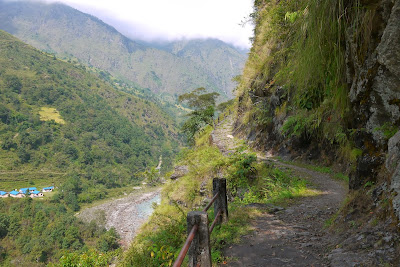 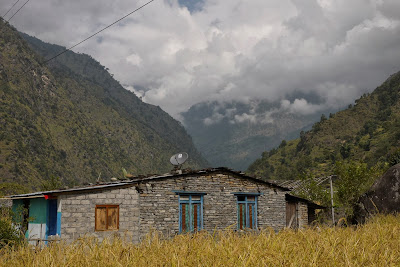 Our third day was similar, walking 15.4 kilometres. We had to put our fleeces on that morning. We didn’t keep them for long as the trail was going up right away, warming us up really quickly. Our tea and early lunch break in Tal was very welcome as it was located right on top of a crazy hill and we definitely needed to stop. We were still following the same river and it was weird to climb a mountain and end on a plateau with the quiet river beside us at the top. We stopped for the day in Dharapani, at an altitude of 1860 meters. We took a shower as soon as we arrived, but the water was very cold. Not easy to get under the water when it is that cold. We were hoping to see a hot shower on the trail again, but we were not sure if this would happen. We had supper while talking with a nice Australian couple that were just back from trekking in Tibet. We had a nice conversation but everybody was tired and wanted to go to bed at one point. That is when we realized it was only 7 pm. It felt like it was much later but it confirmed that we were not the only ones being exhausted at night! 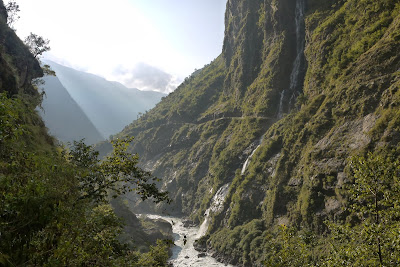 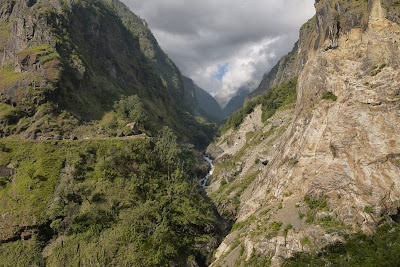