We woke up at 6am, had breakfast and went our way, only to stop almost right away for the check point. We finally started our trek at 7:30. We stopped for tea in Danaqyu. We asked the lady if she had any bamboo sticks and she did! One of them was a little bit short, but it still made a big difference when it was time to climb up mountains. Especially right before Timang, where we took a ‘shortcut’ in the forest. It was a very steep climb and we were really happy to have found the sticks. We had to stop for another checkpoint in Koto, about 45 minutes before Chame where we decided to stay for the night. Chame is a bigger village and there are many shops just like in Thamel, in Kathmandu. There are also a lot of tourists. We arrived at 3 pm and the first hotel we had chosen was already full, so we walked to the next hotel, the Himalayan, where we got a triple room for the price of a double room. We were a little bit cold and very tired after the 15.6 km day. The menus are very similar everyday, and today we decided to try one of the Nepali specialities said to be gentle on the stomach and believed to cure everything; Garlic soup. With the amount of garlic in the soup, we can understand why no stomach bug could survive! We had a good time sharing stories with the other travellers. We went back to the room around 7 pm and went to bed at 8:15. 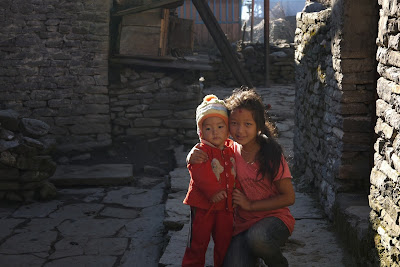 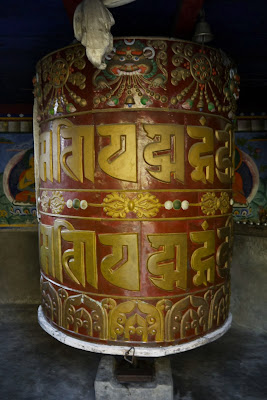 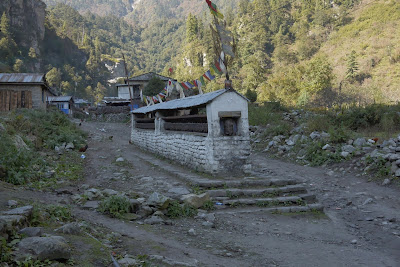 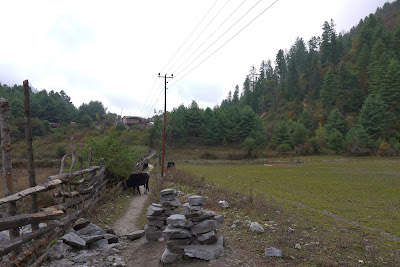 On that fifth morning, we decided to shop for more bamboo sticks so we could have 2 each, but unfortunately we waited too long on the trail to start looking for that and as the vegetation and scenery changes, there is less and less bamboo. We couldn’t find bamboo stick so we bought two pairs of regular aluminium walking sticks. We found them really useful throughout the day, especially when needing the extra pull going up. We followed the road for most of the day, crossing the river once more, stopping quickly for apples and walking through a forest to arrive in Dhikur Pokani just in time for lunch.

We had Dhal Bat and were enjoying ourselves and the view until a group arrived. It wasn’t so quiet anymore but not so bad. And that is when a second group arrived. They were loud and not concerned about the Nepalis’ custom and traditions and they quickly took their t-shirt off, and 2 girls ( a younger and an older one) were just wearing sports bra. Not very respectful to the local culture. We left quickly as soon as we were done eating and followed the Upper Pisang trail.

Upper Pisang deserves its name as it is much higher than Lower Pisang! We were rewarded by amazing views of Annapurna when we finally made it to the village. The village is also very different, no colourful buildings built for tourists, but mostly houses made of rocks and wood. We decided to stop in a brand new hotel up the hill. We asked the owner if he has hot water and outlets in the room, but no. We rushed to the bathroom, undressed and tried the water. It was ice cold. The water was coming straight from the mountain, probably from a glacier and it didn’t get warmer on the way down. We were just barely able to wash our hair and it felt like our brains were going to freeze right up.

We chatted with a group of German guys who then invited us to join them on their walk to the monastery to see the sunset. We went up a few more steps, and the view was even more stunning! The local community is rebuilding a new monastery to replace the old one, they say it is a work in progress but is was simply stunning. They set up plastic chairs so we could enjoy the view while drinking the very good lemon tea offered by the monk. We were even lucky enough to witness an avalanche and catch in on video. We came back down to the hotel when we were cold enough and went to the restaurant for supper. After talking to the German guys, we changed our plans slightly, we will go up the hill towards Pisang Peak as the views are said to be impressive. 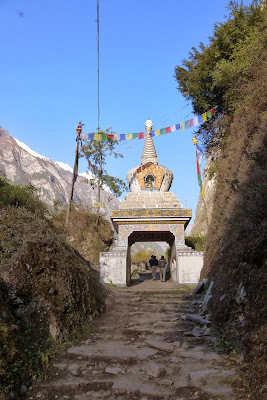 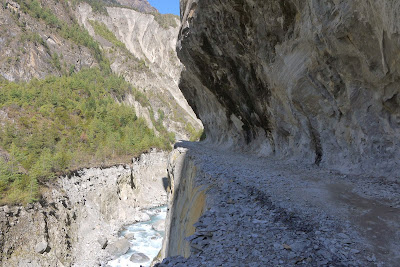 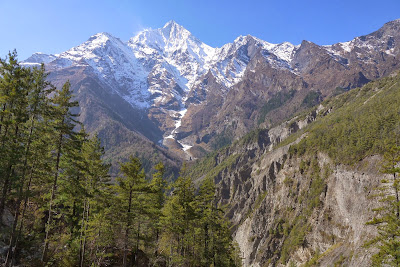 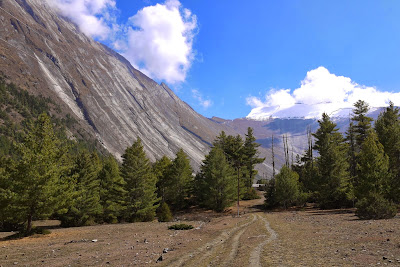 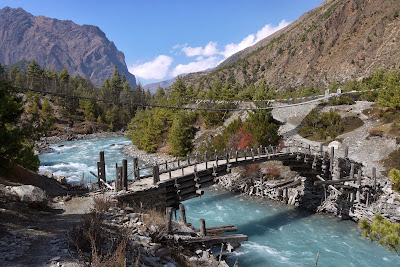 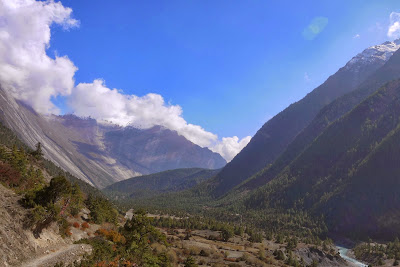 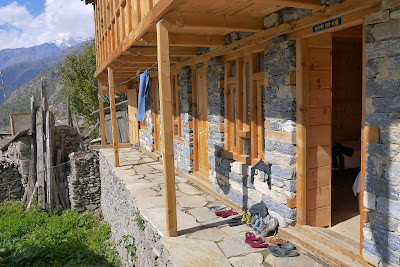 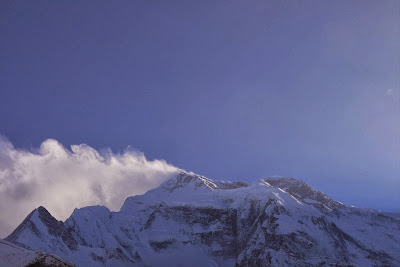