Day 6 to 8, from Upper Pisang to Manang

We left the hotel at 7:35 am and followed the main trail out of Upper Pisang, until we saw a junction. We took the right side, the one going uphill. We met an older lady carrying a huge basket. She asked us if we really wanted to go to Pisang Peak or follow the main trail. It was good to know that she is looking out for tourists so they don’t get lost. It took us 2 hours to get to the viewpoint. We had an awesome view of the valleys on both sides and Annapurna 2 from the top.

We enjoyed the view for a while and made tea and ate granola bars. After looking on the GPS we saw that the next village was about 2 km away in straight line, so we decided to try to find a way in the mountain instead of having to go back down and up again. We followed an animal trail to the forest. We had also seen a group with a guide heading in that direction and as their were not back we assumed they had find a way to get through. But after walking in the forest for about an hour we came to the conclusion that there was no trail to get to Ghyaru, so we turned around, made our way back to the viewpoint and started our descent. We met the group we had seen in the forest back in the trail down to Upper Pisang. They too didn’t find a trail. The first hour was fairly flat and it felt really good on the legs after our climb and descent. The last hour to Ghyaru was a different story.

We had to go almost as high as the first mountain and is was very difficult. Being already tired from our first expedition plus the difference in altitude, made this mountain challenging. We finally arrived in the village and decided to stay at the Annapurna hotel. It was a good choice as we got to experiment a very rustic Nepali house. The family was nice even though the communication was not easy between their limited English and our non-existent Nepali. 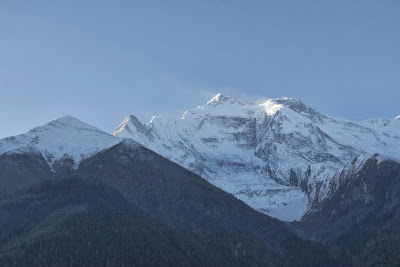 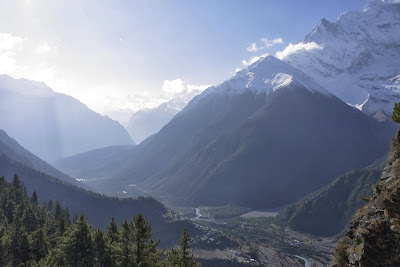 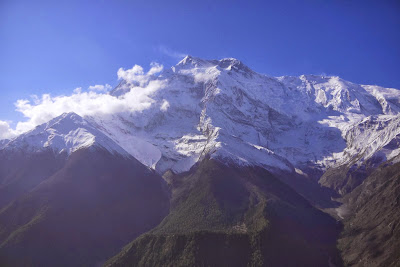 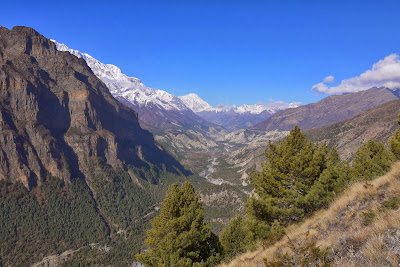 Day 7 to Mugje
We woke up at 6, with the room filled with smoke from the firewood stove. We had breakfast, and started our walk at 7am. It was very cold. We had planned on filling our water bottles in the morning, put the little tablet in the water and then use it later during the day when the water was purified, but it didn’t go as planned as the water pipe was frozen shut. It was also pretty cold going to the toilet in the morning! We walked for an hour before stopping for milk tea in a small tea house just by a viewpoint. We decided to follow the lower trail to make it to Mugje. We went down for a while, working those knees. The last section was more flat and went through a different scenery and vegetation again. We arrived in Mugje around 11am and sat for lunch in the “Pie in the sky” restaurant and bakery. We decided to relax for the afternoon and start our hike to the Ice Lake from there the next morning. We showered with “hot” water as advertised. The water was in no way hot, but bearable. We showered quickly anyway as it was getting cold with the wind coming in. We sat on the rooftop terrace to read and enjoy the sun. 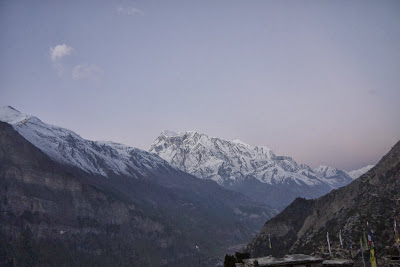 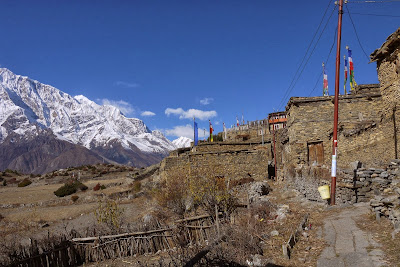 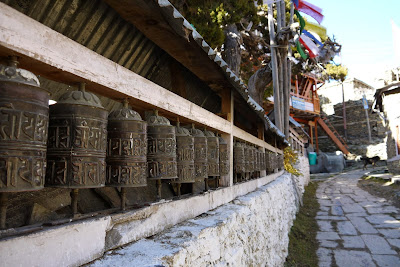 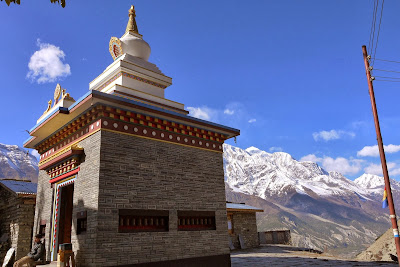 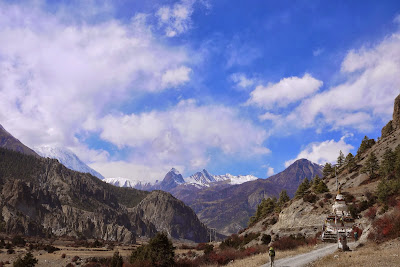 Day 8 – to Ice Lake and Manang
Already a week of walking done! We woke up at 5:30, to try and have breakfast at 6, but we finally got our food at 6:30. It was very cloudy and we weren’t sure if the sky was going to clear up, but as we ate our breakfast we could see part of the clouds getting higher and moving away. We started our ascent right by the hotel. It was a pretty steep climb almost all the way up. We decided to carry our bags as a practice for the pass. It was very demanding to climb the first 1000m. We took just a few short breaks, and toward the top, we reached a plateau. We were getting very tired and hungry so we sat for lunch. After our lunch break, we decided to leave both our bags behind a little bush and try to get to the lake with only the camera. It was starting to be quite cold as the wind picked up. We made our way up the last few hundred meters and the path was going around the hill to the lakes. The view was stunning, but we didn’t take much time to enjoy it as it was cold and we were both getting a headache from the altitude. We climbed from 3400 metres to 4600 metres.
We then made our way back down, towards the bottom of the hill. We followed what we thought was the main trail, but it turned out to be a path in a field where goats go to eat. We made our way to Braka, and decided to keep going to Manang, hoping to get a room in a hotel that would have WiFi. We should probably have stopped in Braka as the last half-hour was too much after that long day. We arrived exhausted and had to climb a little bit to reach Manang. We started looking for hotels, but they were all full and none of them had free WiFi, just Internet cafe. We finally arrived to the Northpole hotel where the girl working in the bakery told us there was only one room left. We took it, dropped our bags and laid down for a while. We had the opportunity to witness a festival parade going down the main road in Manang. It is a festival that is held only once every 3 years. They wear masks and dance around to chase the bad luck away. We weren’t really as excited as the girl working in the hotel due to our headaches but it was still interesting to see. 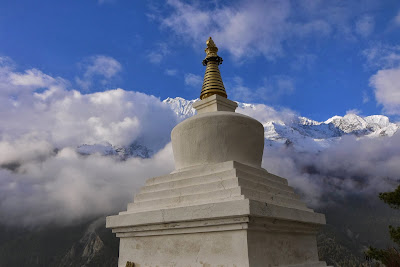 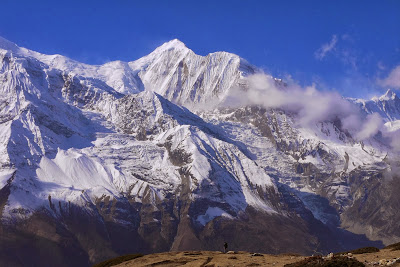 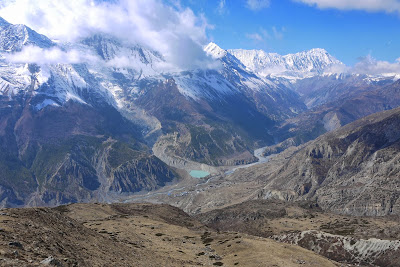